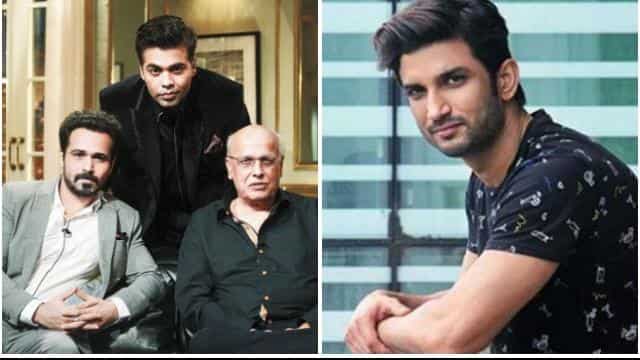 Sushant Singh Rajput’s suicide has left everyone with a deep shock. Even after 6 days of the actor’s death, the process of remembering him remains on social media, while many people in the entertainment industry are still paying him their tribute. Meanwhile, a video related to Sushant is being seen a lot on social media, in which Bollywood actor Emraan Hashmi is saying something about the career of Sushant, which fans are liking.

It is worth noting that this video related to Sushant is from Karan Johar’s chat show ‘Koffee with Karan’, in which actor Emraan Hashmi and Bollywood film maker Mahesh Bhatt are seen as guests. In the video, Karan Johar questions Imran about which actor Sushant Singh Rajput, Varun Dhawan, Siddharth Malhotra, Ayushman Khurana, Arjun Kapoor, Aditya Roy Kapoor have a bright future. On hearing Karan’s question, Imran immediately loses the names of Sushant Singh Rajput and Varun Dhawan without spending time.

Sushant’s girlfriend Riya made many revelations in 9 hours of inquiry, know

It is proved by the talk of Emraan Hashmi that he knew that actor Sushant’s career will be very bright and he will make a different place in Bollywood. However, before he could complete it, he said goodbye to Bollywood forever.

Vikas Gupta gets badly emotional after trolling the child, know

Let us tell you that Sushant Singh Rajput started his acting career in Bollywood with the film ‘Kay Po Chhe’. After this, actor M Dhoni has given hit films like The Untold Story and Chichhore. However, Sushant committed suicide by hanging himself on Sunday (14 June) before making his next film, which has shaken the entire industry. The cause of the actor’s death is yet to be ascertained but the police are constantly investigating the case. Sushant Singh Rajput was cremated in Mumbai on June 15, with select Bollywood stars making an appearance. His family members had reached Mumbai from Patna for the actor’s funeral. Sushant’s ashes were immersed in the MIT Ganga Ghat.

Sushant Singh Rajput had unique talent like ‘virus’ of ‘3 Idiots’, know what