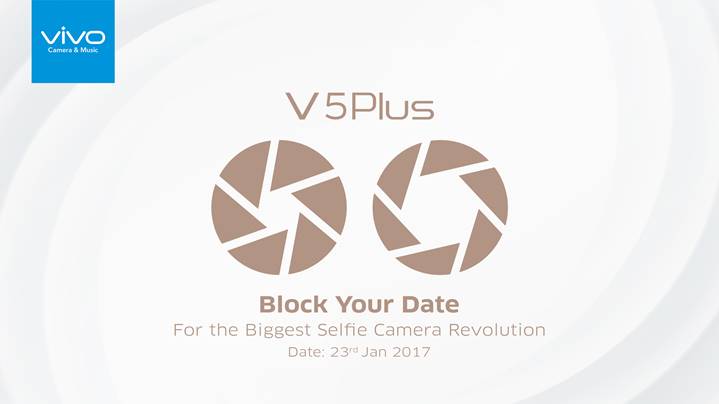 Chinese handset maker Vivo is all set to launch its another smartphone in the market to give a competitive fight against its competitor. The company have sent the media invite for its event on January 23rd which is most likely to be held in Mumbai or Bangalore. Vivo v5 launched in November 2016 in Mumbai, India. Vivo is now set to launch Vivo V5 plus. The Vivo V5 plus is different from Vivo V5. Vivo V5 plus is expected to be the successor of Vivo V5. Vivo’s V5 series is all about the selfie camera with Music, and the new V5 Plus is supposed to be a dual-front camera.

The invite teaser clearly indicates the dual camera and the line say “For The Biggest Selfie Camera Revolution” which show the front camera. The Vivo V5 was positioned as Selfie Camera and not as a smartphone during the launch in November 2016.

Vivo V5 Plus is considered to be a competitor to Huawei Honor 8 with 12MP Dual-lens rear camera which was launched in October 2016 while Vivo V5 plus is expected to be a Dual-lens front camera.

Vivo V5 comes with a 20MP front facing camera, which claims to shoot great selfies, even in low-light conditions with a feature called Moonlight selfie. The V5 also comes with a front-facing LED flash which illuminates the faces in the selfie in little or no surrounding light environment. The secondary camera comes with a 13MP lens with LED flash as well.

Vivo V5 is a 5.5-inch HD display, which has 1.5GHz octa-core MediaTek MT6750 processor, 4GB of RAM and a 3,000 mAh battery. The internal memory of the phone is 32GB, which can be expanded up to 128 GB. Vivo V5 runs on Android 6.0, with the company’s FunTouch OS on top. The device has 2.5D glass overlay on display, and sports a unibody form factor and a fingerprint scanner.

Well, We’ll have to wait and watch for the final specifications of the Vivo V5 Plus when it is launched on January 23. Vivo V5 is priced at Rs 17,980 currently in the market; the new phone with its dual front camera is expected to be priced higher than this.