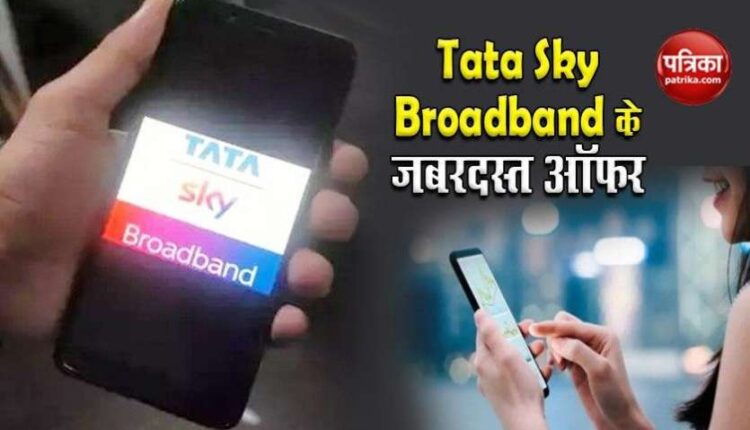 new Delhi. In today’s time, people are increasingly moving towards the Internet. Because by connecting to the Internet, people’s work becomes very easy, in such a situation, many companies are bringing such new broadband, you will be surprised to hear the offer.

Recently, a big offer has been introduced by Tata Sky Broadband, which provides maximum 500GB data with a strong speed of 300Mbps. At the same time, Reliance Jio has also announced its new plan. Let’s know about their plans ..

If you prefer to take 6 months and 12 months plans of Tata Sky Broadband, then according to this plan, you will be offered landline service free in the unlimited plan, i.e. customers who take long-term plans, the benefits of free landline service Can lift If you take a 1-month or 3-month plan, you will have to pay an additional Rs 100 per month along with the base fair.

Apart from this, there is a big relief to the customers that if your fixed 500GB plan is being provided with the option of data rollover (the remaining data is added next month).

This new plan has been made available in some places, now it can be implemented soon in the rest of the country.

Tata Sky Broadband had earlier launched a 300Mbps speed plan in May, which provided unlimited data. The price of that unlimited plan is priced at Rs 1900, but now 18 fixed GB broadband plans are being made available by Tata Sky Broadband. The price of which is Rs 950 to Rs 1,900. These plans will be given on a monthly, quarterly, half-yearly and yearly basis. However, in the monthly plan, users will not be provided facilities like free installation, free router. If you choose half-yearly and annual plans, then the company will give you a discount of 10 to 15% on the subscription plan. The company’s 6-month plan comes from Rs 4,860 to Rs 5,400 and Rs 5,950. And the same annual plan has to pay Rs 9,180, Rs 10,200, Rs 11,220.

KVP: This scheme of Post Office will double amount in 124 months, will get millions of rupees on maturity