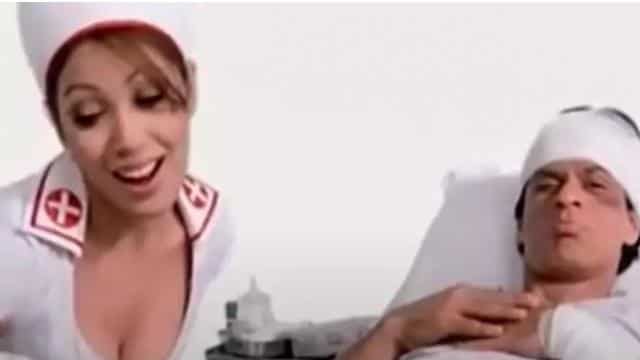 ‘Tarak Mehta Ka Ooltah Chashmah’ fame Babita ji a.k.a. Munmun Dutta has gained a lot of popularity from the show. In the show, she plays Babita ji and her friendship with Jethalal entertains the audience a lot. Dilip Joshi a.k.a. Jethalal is also seen hitting healthy flirt with Babita ji. Babita keeps looking for an excuse to stay with him. The audience also likes this style of both.

But do you know that Munmun Dutta worked in an ad with Shah Rukh Khan before becoming a part of Gokuldham Society ie ‘Tarak Mehta Ka Ooltah Chashmah’? Shahrukh Khan played the role of a patient in this ad. Shahrukh lies on the bed due to a broken leg and Munmun is seen as a nurse in the ad. Munmun is seen signing with a pan on the plaster mounted on Shah Rukh Khan’s leg.

Both worked together in a pan add. Talking about Shahrukh Khan, Munmun says that Shahrukh has come to our show for promotion of many films. The all-loving King Khan loved to come on the set of our sitcom.

Ritesh Deshmukh shares video on father’s birth anniversary, will be emotional by watching

Talking about lockdown and work, Munmun says that I miss the set a lot. For this, I often share old photos of the set with fans on my social media account. If things get better soon, then I return to work.

Let me tell you that due to the lockdown in the entire country, shooting of all film and TV serials is stopped. In such a situation, even new episodes of ‘Taarak Mehta Ka Ooltah Chashmah’ are not telecasting. All the celebs are spending time with family at their home. Fans are eagerly awaiting when they will be able to re-enjoy their favorite comedy show.