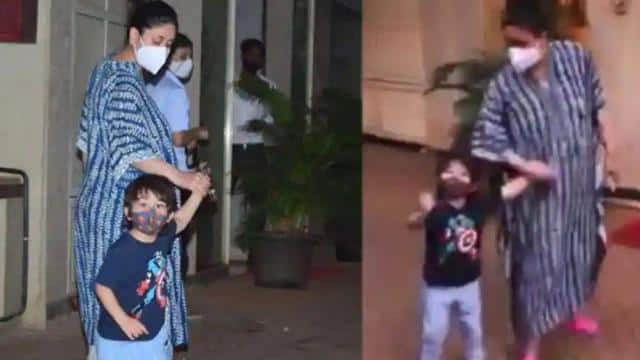 Kareena Kapoor and her son Taimur Ali Khan have always been photographers’ favorites. Wherever the two go, the cameraman attempts to click their pictures. Recently, the younger Taimur, who is celebrating his fourth birthday, has been seen troubled by cameras many times. Now a new video of him has surfaced, in which he is seen shouting ‘not allowed’ from the photographers. In this video, Kareena Kapoor and Taimur Ali Khan are seen going together. Even after seeing the reporters, Kareena Kapoor goes straight away, while Timur turns back and sometimes says ‘not allowed’ when the camera lights on. Kareena Kapoor appears to be trying to take her along with him, but he repeatedly asks the media not to take pictures.

Announcing the writing of the book, Kareena Kapoor wrote on Instagram, ‘Today is a good day to announce your upcoming book’ Kareena Kapoor Khan’s Pregnancy Bible ‘. In this book, I will talk about everything from morning sickness to fitness. I can’t wait for this book. This book will be published by Juggernaut Books in 2021. ‘

This new star is giving a tough fight to Sapna, the song got 23 million views

Along with this, Kareena Kapoor has also shared the cover of her book in Instagram. In this book, Kareena Kapoor will give her opinion on all medical matters related to pregnancy. Apart from this, the symptoms that women feel during pregnancy, exercise, morning sickness, wellness etc. will be talked about.

Kareena Kapoor said, ‘I believe pregnancy is a natural process. This process should be healthy and with joy. In this book I will explain how I have handled my pregnancy. It will give you all the information about how you can be happy. Pregnancy means a lot to me and I hope that this will also give guidance to women who become mothers in future.