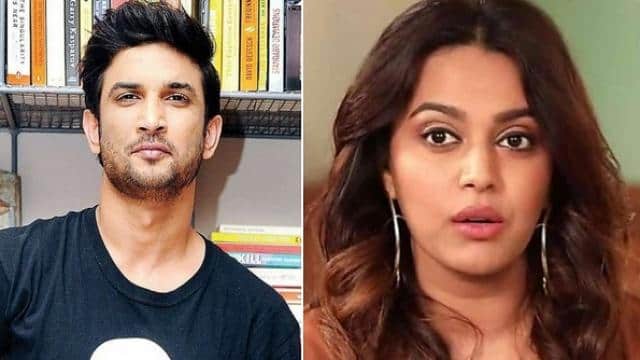 The debate over nepotism has intensified since the death of Sushant Singh Rajput. All the celebs are targeting each other on this issue. Meanwhile, Swara Bhaskar has apologized to Sushant’s family.

Swara tweeted, ‘I think we should apologize to Sushant Singh Rajput’s family as many times they have heard the actor’s name in our debate. It is not about us. Sushant’s film is going to be released soon. We should celebrate their memories. We must be humble ‘.

Had an introspective moment. I think we owe #SushantSinghRajput ‘S family an apology 4 the number of times they must read his name in our arguments. This is not about us. 🙏🏽 Sushant has a release coming up, expected celebrate the memory of the bright life we ​​lost. Improving be kind.

Swara Bhaskar has been in a debate with Kangana Ranaut recently. Recently, in an interview, Kangana had told Swara and Taapsee Pannu to fidget after which both Swara and Taapsee responded to Kangana. Swara tweeted on this, ‘Kangnaji ran parallel cinema with’ Pather Panchali ‘in 1955, started Feminism with Queen’s film in 2013, but first of all in 1947, he got independence for India, saying an unknown coy needy , Outsider, eating the fruit of flattery (mango) and licking fingers. ‘

Kangana ji ran parallel cinema with ‘Pather Panchali’ in 1955,
She started Feminism in 2013 with Queen’s Film, but first of all in 1947, she got India independence.
-Kahit an unknown sycophantic needy outsider, eating the fruit (mango) of applesauce and licking fingers. 🙏🏽🙏🏽🥭 🥭 pic.twitter.com/8mutISNgOr

Explain that Kangna had also said in the interview that Taapsee and Swara are B grade actresses, although they look better than Ananya and Alia, but still they do not get work. Swara gave a fun reaction to this comment from Kangana as well.

-Needy outsider
– B grade actress
(But) – better looking & better actor than Alia Bhatt & Ananya! ” 4
Net net I think this was a compliment! 4
Thanks Kangana! I think u are gorgeous, generous & a great actor! Shine on 🌻🌻🤩🤩#KanganaSpeaksToArnab #Nepotism @KanganaTeam https://t.co/fIg4i3Lz5F

Swara had tweeted, ‘Hungry Outsider, B Grade Actress, but also good looking and better actor than Alia Bhatt and Ananya Pandey. I think it is complementary. Thank you Kangana, I think you are beautiful, a good actor and a good person too. Always shine ‘.

Sonu Sood became emotional on mother’s birth anniversary, said- I wish I could hug you

Madhuri Dixit was seen surfing amidst the waves of the sea, gave this special message to the fans