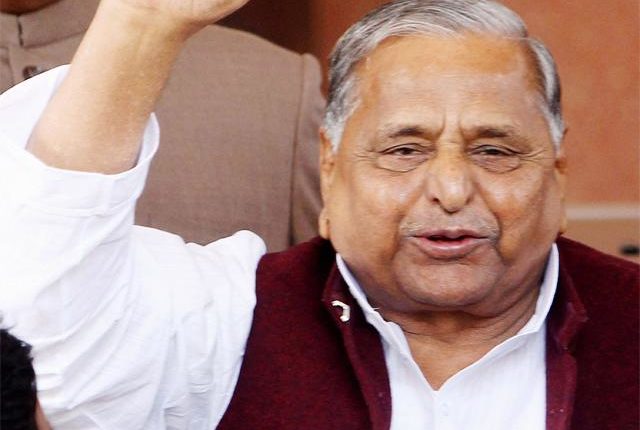 NEW DELHI- UP Election: It was yet another unpleasant day for Uttar Pradesh chief minister Akhilesh Yadav who was yet again snubbed by his father, Samajwadi Party chief Mulayam Singh Yadav.

First, Mulayam contradicted Akhilesh and firmly ruled out an alliance with any party for the upcoming Uttar Pradesh elections. Then, to add insult to injury, Mulayam’s list of candidates left out several pro-Akhilesh ministers and included many that his son objected to.

“The Samajwadi Party is not forming an alliance with anyone,” Mulayam said firmly and categorically, two weeks after Akhilesh confirmed that SP members were in touch with Congress leaders for a possible alliance. In fact, Akhilesh had gone so far as to say that “if there is an alliance, we will get over 300 seats.” That, clearly, isn’t going to happen.

Tellingly, Akhilesh wasn’t present at the media briefing with Mulayam, but Shivpal Yadav, the SP chief’s brother, was. Not long ago, Mulayam sided with his brother against his son on the issue of who should hold key positions in the UP arm of the party and the government. Now, Akhilesh and his uncle Shivpal are at loggerheads over the distribution of election tickets, after the latter unilaterally announced a list of candidates for 175 seats. An annoyed Akhilesh then prepared his list of preferred candidates for all the seats and sent it to Mulayam

And now it appears Mulayam has again come out on the side of his brother and against his son, going by the list of candidates he announced today for the elections he said will be held on February 28.

Mulayam announced candidates for 325 of the 403 UP assembly seats. Akhilesh wasn’t among them. That’s because Akhilesh being chief minister means he can choose where he wants to contest from. Shivpal Yadav, the SP chief said, will contest from the Jaswant Nagar assembly seat.

Mulayam said tickets had been given to 176 sitting lawmakers and that candidate for the remaining 78 seats will be announced later. “For every seat, there were hundreds of ticket seekers. We respect those also whom we couldn’t give tickets,” Mulayam said.

As many as 53 sitting legislators have been denied tickets, and they include senior minister and close Akhilesh aide Arvind Singh ‘Gop’, whose ticket has been given to Rakesh Verma, son of senior party leader Beni Prasad Verma, IANS reported. Another close aide of Akhilesh, Pawan Pandey, has also been denied a ticket, IANS said. Conversely, the list has the names of Sigbatullah Ansari, who is the brother of jailed gangster Mukhtar Ansari, and Atiq Ahmed who faces over 40 criminal cases including of murder and attempt to murder, PTI reported. Akhilesh is believed to be opposed to their nomination.

In fact, at today’s press briefing Mulayam was asked how many candidates he selected from the list submitted by Akhilesh. The SP chief prevaricated and said other leaders had also given their own lists and all had to be accommodated.

As per the list announced by Mulayam today, Azam Khan will contest from Rampur, Gayatri Prasad Prajapati from Amethi, Ram Shankar Katheria from Kaimganj, Pinki Yadav from Asmoli, Harish Lodhi from Dibai, Tejvir Singh from Chhara, Raja Mahendra Aridaman Singh from Bah, Mohd Rehan from Lucknow West, Ravidas Mehrotra from Lucknow central, Mahendra Singh Patel from Rohanya and Durga Prasad Yadav from Azamgarh, ANI reported. With demonetisation figuring high on everybody’s minds, Mulayam said there will soon be a verdict on it.