Silver can reach one lakh rupees in festive season, know how expensive gold can be 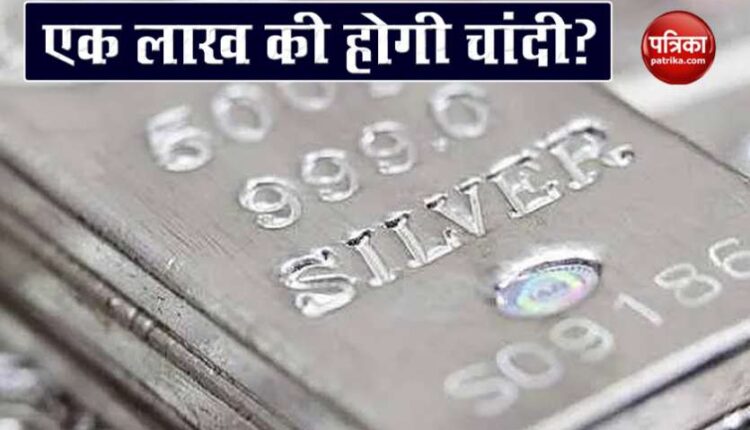 new Delhi. Worldwide measures are being taken to deal with the economic challenges faced by the Corona epidemic, interest rate cuts by central banks, weakness in the US dollar and investors’ interest in investing in gold and silver prices. It has increased, due to which their prices are constantly rising. Bullion market experts say that in the festive season, the silver price in the Indian market can go up to Rs 1 lakh per kg, while the gold price can touch Rs 60,000 per 10 gram level. is. However, the assessment of Sarafa market trading organization on the rise of Gold and Silver Price Today is different. This is also proved because in the first week of August, the price of silver has increased by Rs 11 thousand per kg and gold has increased by Rs 2400 per ten grams.

Silver prices can go up to one lakh rupees
Ajay Kedia, director of Kedia Advisory, said that as gold has become very expensive, the demand for jewelery may rise in silver, while industrial demand also remains, so the price of silver can go up to Rs 1 lakh per kg by Diwali. Silver is currently running below Rs 78000 per kg in the domestic market and has become more expensive than Rs 44,000 per kg in the past five months in the Corona era. If we talk about a woman in the past, then the price of silver has seen a rise of 11 thousand rupees. He said that all the factors that support the boom of this precious metal are favorable, so gold and silver will remain strong. Kedia predicted gold to go up to Rs 60,000 per kg by Diwali.

The price of silver may fall
Shantibhai Patel, president of the Gem and Jewelery Trade Council of India (GJTCI), says that gold can be seen at up to 60,000 rupees per 10 grams, but the way silver has risen in the past, it is likely to fall soon. happened. He said that the game of the bookies in silver cannot be ruled out, hence the possibility of touching the level of Rs 90,000 per kg is less. Patel said that silver is at a record level in the domestic market and during the festive season its price can be in the range of Rs 80,000-85,000 per kg. He said that spot demand will not increase until the price stabilizes once because those who want to buy jewelry are waiting for the price to break.

Tremendous rise in silver in last five months
On March 18, the price of silver on the domestic futures market Multi Commodity Exchange was broken by Rs 33,580 per kg, while on Friday, the record jumped to Rs 77,949 per kg. That is, during this time, the price of silver has been increased by Rs 44,369 per kg. While talking about the first seven days of August, a quarter of the total increase has been seen this week. On 31 July, silver prices had closed at Rs 64984 per kg. On 7 August, silver fell by Rs 76052 per kg. During this period, the price of silver has increased by 11 thousand rupees per kg.

Reasons supporting the rise in gold and silver
1. The global economy is facing a slowdown due to the increasing outbreak of Corona virus infection, due to which investors are more inclined towards hard assets (gold, silver or real estate, crude oil etc.) rather than soft assets (shares, bonds). Among them, gold and silver are their first choice as it is considered a partner of crisis.

2. The relief package brought in various countries to deal with the economic challenges facing Corona has increased the interest of investors in gold and silver as the relief package is expected to increase inflation, due to which investors are inclined to secure investment instruments. Goes towards

3. In an environment of uncertainty due to geopolitical tensions, investors are inclined towards gold and silver.

4. Gold and silver are getting support due to weakness in US dollar.

5. Gold and silver have continued to rise as investors trend towards buying ETFs.

Will you benefit from Covid-19 loan relief? Will there be relief on credit card dues?…

Manasi Singh Oct 29, 2020
Singer Neha Kakkar and Rohanpreet Singh's marriage in the year 2020 were very much discussed. On October 24, the…