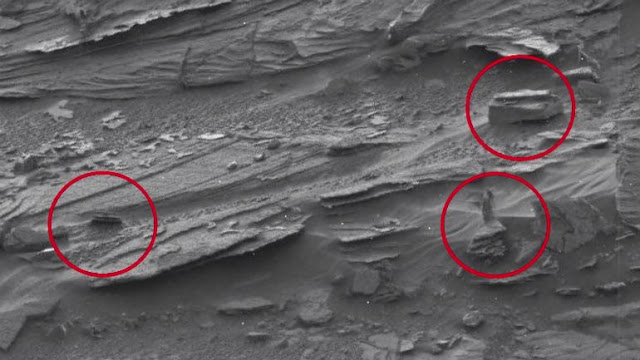 On the third anniversary of Curiosity Rover’s landing on Mars, NASA launched a new program called Mars Trek. Based on the lines of Google Earth, this simulation helps one to explore the red planet. The motive behind this launch is to find out the possible landing sites on the planet and prepare for the execution of the first human expedition to Mars during the 2030’s.

Another program called Experience Curiosity has been revealed where one can take a stroll on the planet through the rover and make observations through a small screen attached in the rover. NASA even updated the latest images taken by the Curiosity Rover.

Woman on the red planet?
One of these images turned out to be a rage on the social-networking sites when UFO Sightings Daily brought viewers attention on a picture claiming that the posture in the picture is of a woman. UFO Sightings Daily shares photos and videos of alien look-alikes.

Describing the woman like structure in the image, Scott C. Waring from the UFO Sightings Daily website wrote, “It looks like a woman partly cloaked. The woman seems to have breasts…indicated by the shadow on its chest. We also see two arms that are lighter in colour and what looks like a head with long hair. It’s hard to tell if this is a living being or a statue of a being from long ago. However, a statue that small would be eroded and destroyed easily, so, it has a higher chance of being a living being.”

The structure looks 8-10 cm tall. He even warned other countries by saying that it’s real and this should be taken seriously by all the countries. Though NASA hasn’t confirmed anything related to it, it’s too early to talk about the existence of extra-terrestrial life.

A few days ago, Internet was swamped with the NASA’s photos highlighting a crab-like structure on the Martian rocks. However, NASA hasn’t confirmed whether it was an alien crab or a Martian rock resembling a crab.