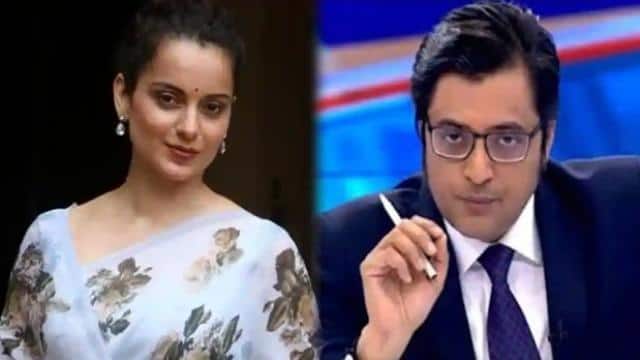 The war of words has been going on for the past few days between Kangana Ranaut and Shiv Sena, who are vocal in Sushant Singh Rajput death case. The Shiv Sena mouthpiece Saamana today targeted the actress amidst an altercation between Kangana Ranaut and Sanjay Raut. Not only this, Arnab Goswami, editor-in-chief of Republic Bharat TV, who challenged Kangana Ranaut for hacking the interview, has also been targeted in the mouthpiece Saamna and has been called a traitor. Today’s article in the Shiv Sena mouthpiece ‘Saamana’ has said without name that it is ‘harakhori’ to support the treason of traitor journalists and betrayal artists to bring forth the political agenda. Please tell that Sanjay Raut is the editor of this mouthpiece and even before that he has used the word haramkhor for Kangana.

Arnab and Kangana target without name
It is also written in Saamana, ‘It is haraamkhori’ to support the treason of traitorous journalists and betrayal artists to bring political agenda to the fore. It means dishonesty from the soil. Those who stand with the dishonest people of Maharashtra, they will not feel sorry for 106 martyrs but even 11 crore people of the state will not forgive them. Religion of Hindutva and Sanskrit and renunciation of 106 martyrs was insulted and by doing such insult, the Central Government is giving respect to the guard of special protection to the person who threw Chhatrapati Shivraj’s drunk at Maharashtra.

What was written on Kangana’s statement
In the mouthpiece Saamna, Kangana’s comparison of Mumbai said on the statement of Pakistan Occupied Kashmir, ‘Whose Mumbai? No one should ask this question. Mumbai is the capital of Maharashtra, but also the center of the country’s largest economic transaction. 106 Marathi people have sacrificed for this Mumbai. Therefore, Mumbai belongs to Maharashtra. Everybody living with faith in Mumbai belongs to Hindusthan. Before this, she is from Maharashtra of Chhatrapati Shivarai. That is why she also belongs to Hindusthan. Comparing Mumbai to ‘Pakistan Occupied Kashmir’ and insulting the Khaki uniform by calling the Mumbai police a mafia etc. are signs of a deteriorated mentality. ”

Kangana also questioned Y category security
In the confrontation, the central government has been targeted even after giving Kangana on Y category security. It is written in Saamana, ‘The humiliation of 11 crore Marathi people of Maharashtra and Mumbai seems like a crime like treason. But when the National Ministry of Home Affairs of the Modi government stands with the people committing such crimes, our 106 martyrs will be shedding tears in heaven. If someone had made a derogatory statement about cities like Ahmedabad, Gurgaon, Lucknow, Varanasi, Ranchi, Hyderabad, Bangalore and Bhopal, would the Center have given him a ‘Y’ security guard? Explain this to the BJP of Maharashtra. Would the BJP people have given such support to the owners of the TinPat channels, chanting Devendra Fadnavis, Prime Minister Modi or Home Minister Shah’s name ‘Are-Ture’?

Insulting our Goddess comparing Pok
Many people who have claimed their rights on Mumbai have come forward. But Mumbai is the offering of Goddess ‘Mumbai’. Mumbai or Mumbadevi Koli is the Kuldevi of the people. A Koli named ‘Munga’ established this goddess, hence her name was first named ‘Mungachi I’ and ‘Maha-Ambai’ and then after ‘Mumbai’ got the easy name of the goddess, many people think. Some say that Mumbai is the form of ‘Mrunmayi’. Our goddess was insulted by comparing her mother with such a ‘goddess’ form to the Pakistan occupied area.

Center on China
On the pretext of Kangana dispute, Shiv Sena has also tried to surround the Modi government due to the border dispute with China. The Shiv Sena wrote, “The way all the BJP men are standing with Maharashtrians today, with the same confidence that the Chinese monkeys who entered our border would have shown courage, the country would not have been insulted on the border of Ladakh and Arunachal.”