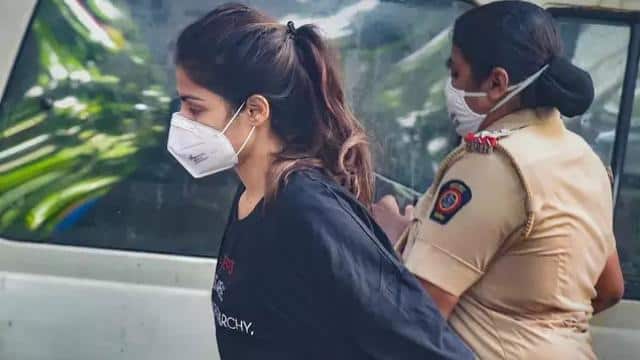 The main accused Riya Chakraborty, who was arrested after a drugs angle surfaced during the investigation into Sushant Singh Rajput’s death, was sent to judicial custody for 14 days by the court. Riya will have to remain in jail till 22 September. Riya was arrested on Tuesday evening by the Narcotics Control Bureau (NCB) after a three-day-long interrogation. The court also rejected the bail application of Riya Chakraborty during the hearing.

NCB produced Riya before the court after arresting her. During the hearing from the video conferencing, the investigating agency had sought 14 days of judicial custody. This was approved by the court. Meanwhile, Riya’s lawyer Satish Manashinde filed a bail application, which was heard in the court. In the drugs case, the investigating agency NCB got Riya to undergo a medical test at Sion Astpal in Mumbai on Tuesday evening. Riya also got a Kovid-19 test, in which she was found to be negative.

NCB Deputy Director K.K. P.S. Malhotra said, “Riya has been arrested and the process of informing her family has been completed.” Sushant’s body was found on June 14 at his Bandra apartment here. Riya waved her hands to the media persons standing outside the NCB’s South Mumbai Situation Office before boarding the car with NCB officials. Riya arrived at the NCB office at Ballard Estate at around 10:30 am on Tuesday morning and also had a bag.

Denied the use of drugs in interview

At the same time, Riya (28) in a recent interview to TV channels denied that she had consumed drugs. The actress was recently questioned by the CBI investigation team, which is camping in the DRDO guest house in Santacruz, a western suburb of Mumbai. Apart from this, the ED has also questioned the actress in the money laundering case. NCB recently arrested his brother Shouvik Chakraborty and Sushant’s manager Samuel Miranda over drugs.