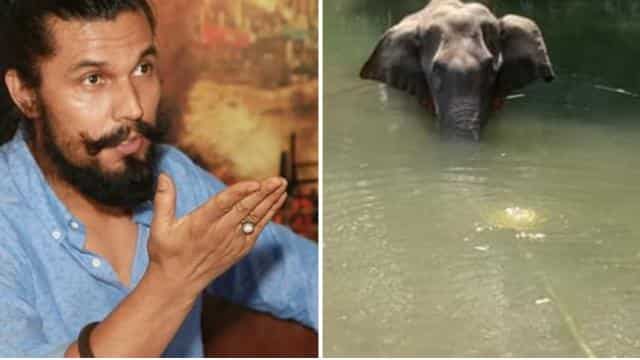 A strange phenomenon of demeanor with an elephant in Kerala came to light when some people fed him a pineapple full of firecrackers. The firecrackers burst into her mouth and the pregnant female elephant was killed. Bollywood stars have also been greatly hurt by the common people on the death of a pregnant Hathini. Anushka Sharma, while venting her anger on this matter, demanded a strict law from the government, while Randeep Hooda has demanded strict action from the Kerala government against the actors who feed the pineapple.

Randeep Hooda also tagged Kerala CM Pinarayi Vijayan and Prakash Javadekar and shared the Hathni photo, writing that a pregnant and friendly Hathini was known by some to feed a pineapple full of firecrackers which is an inhuman act. This is completely unacceptable. Strict action should be taken against criminals. After which done.

An act most #inhumane to will fully feed a pineapple full of fire crackers to friendly wild pregnant #Elephant is just unacceptable..strict action should be taken against the culprits sir 🙏🏽@vijayanpinarayi @CMOKerala @PrakashJavdekar @moefcc @ntca_india https://t.co/ittFQogkQV

The case came to light when a forest officer in Malappuram in northern Kerala shared the incident on his Facebook page. This past became viral as soon as the forest officer shared it and it was shared by about 1200 people. On seeing this, people started throwing food items near the female elephant so that she could get some rest in this problem.

Mohan Krishnan, who is in the rescue team, wrote on Facebook, The female elephant had reached the nearby village from the jungle in search of food. Here she was wandering here and there. After this, some people fed him crackers filled with pineapples. Mohan Krishnan further wrote, The firecrackers were so effective, that his mouth and tongue were badly injured. She wandered throughout the village in search of food. Due to pain, she could not eat anything. The female elephant, despite being injured, did not harm anyone, did not attack anyone. She was very direct and calm. Krishnan further wrote, the female elephant reached the Velliyar River in search of food because she had a baby in her belly. She stood in the water. He also got some rest by pouring his mouth in water.

When the forest officers came to know about the pitiable situation of the elephant, they brought two kumki elephants to drive the injured elephant out of the Valiyar river. It was dragged out of the water after great difficulty, but died.