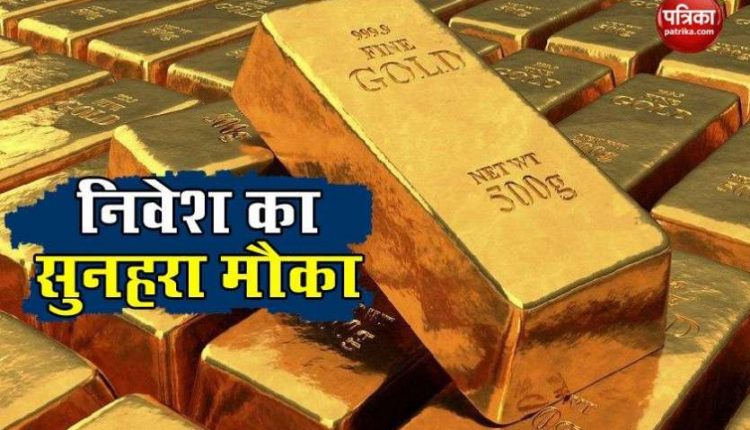 new Delhi. After the closing of the Indian market on Friday, when there was a tremendous decline in the price of Sone in the US markets. After which gold came to $ 1780 an ons. That is, gold is currently broken from the record level to $ 300. The reason for this is being told to the Corona vaccine update. By the way, in December, the price of gold can fall further from 100 to 130 dollars per ons. The reason for this is the change in the portfolio.

The reason for this is that the investment in the dollar is seen more in the month of December and the demand for gold decreases significantly, but this does not mean that the fall in the price of gold is a sign of recession. You can also see this as another golden opportunity to invest in gold. The reason for this is the statement of the World Health Organization which talks about the third wave of Corona. Also, the organization has not made any encouraging statement about the vaccine.

Gold may break further down
According to Ajay Kedia, director of Kedia Advisory, the price of gold may see the end of December and fall. This decline can be seen from 100 to 130 dollars per onus. The reason for this is portfolio revision. Investors are seen making changes to the portfolio in the December quarter. At the same time, investment in dollars increases. Due to which the demand of gold falls due to low demand. On the other hand, multiple covid vaccine updates also increase the pressure in gold prices.

Also read: Farmer movement may not increase inflation of fruits and vegetables in North India, know how?

Recession is not a sign of chance, decline
Ajay Kedia says that it would be wrong to consider the fall in the price of gold as a sign of recession in the current era. Investors need to see this as an opportunity. He said that when gold was jumping, investors were looking for an opportunity to buy gold. Now, even after having the right opportunity to buy gold, it would be stupid to look at the price. The coming month could be good for investors in terms of gold buying. This opportunity should not be let go by hand.

Will you get returns again
Ajay Kedia says that after December, the price of gold can once again see a rise. The reason is the third wave of corona virus. If the World Health Organization’s statement is taken as the basis, then in January February, the third wave of corona virus is expected to come. On the other hand, no positive attitude has been revealed even regarding the vaccine. Claims have been made by many companies, but they are not limited to claims. The World Health Organization has not made any positive statement about the vaccine. Due to which gold can be seen getting support.

The impact will be less in India
Even though the pressure in gold will continue to be seen in the US markets in the next one month, its impact in India may be less visible. The reason is the rise in the dollar. If the dollar keeps up, then even if gold becomes cheaper abroad, it will be expensive to buy gold due to the pressure on the rupee in India. Due to which the pressure on gold in Indian markets may remain low. On Friday, the rupee depreciated to 74.24 against the dollar. After which it is expected to cross Rs 75 in the last week of December.

Gold breaks heavily in Indian futures market
If you talk about the price of gold and silver in the Indian market, then gold has become cheaper by a record level of about 8000 rupees and silver by about 21 thousand rupees. When the futures market closed on Friday, gold fell by about Rs 400 to close at Rs 48,125 per ten grams. Gold has become cheaper by Rs 8000 per ten grams from the record level of August. Whereas in the last one week, gold has fallen by Rs 2310 per ten grams. Whereas in the month of November, gold has fallen by Rs 2745.

30 billion FDI came in first six months, know which country invested the most

Record investment of foreign investors in the stock market, figures came as a surprise