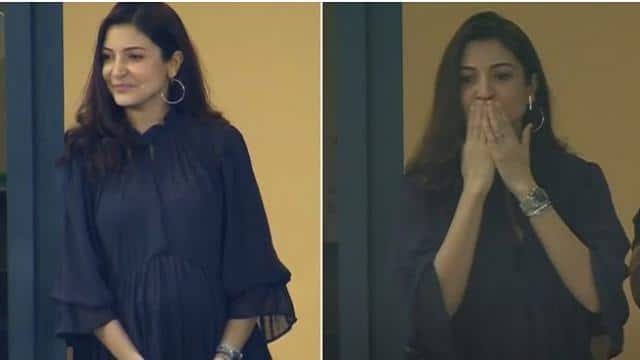 Anushka Sharma arrived at the stadium to watch the Royal Challengers Bangalore and Chennai Super Kings match on Saturday. During this, Anushka wore a blue color dress in which her baby bump was seen. Also, if you see Anushka’s face, then the pregnancy glow is also clearly visible on her face. Many photos and videos of Anushka from the stadium are going viral.

The glow🥺 ♥ AND THAT PROUD SMILE 😍❤🥰 #AnushkaSharma pic.twitter.com/lSvl1RZA0h

Congratulations Anushka Sharma. You take all the credits today. ❤️ Virat Kohli played well today only because of you.

Yes if he can fail because of her, he can succeed because of her too. Logics.#ViratKohli#AnushkaSharma pic.twitter.com/VMRYQsxvwq

Please tell that these days baby filter is trending a lot on social media. Fans are editing photos of their favorite stars with this filter. Meanwhile, Virat and Anushka, whose photos are getting the most viral. Both look very cute in this photo.

By the way, Anushka is enjoying her pregnancy period well these days. She keeps sharing her photos with Baby Bump.

Virat is excited about the new guest

A few days ago, Virat was asked that how do you feel if new guests are coming to your house in January? While answering this question, Virat had said that since he came to know about this, there is no place for his happiness. He had said, ‘It is an incredible feeling. It is difficult to express in words how we are feeling.