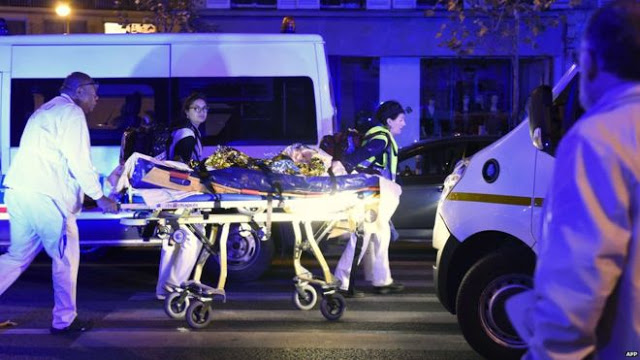 A nationwide emergency has been announced in France by the President Francois Hollande after a chain of shooting and bombing attacks stormed Paris on Friday night. The attack killed almost 140 people, left nearly 200 people injured and around 80 people were injured seriously.

The gunmen stormed inside the Bataclan concert hall where people were enjoying the performance of the American band Eagles of Death Metal. Nearly 100 people were taken as hostages at this site and random fire was opened by the attackers who adorned detonated suicide vests. This venue hall is just a few minutes away from the earlier Charlie Hebdo office which encountered a random shooting rampage in January this year.

Another massacre took place at the sports stadium Stade de France where people were enjoying an amicable football match between Germany and France. The anticipated suicide attack at the stadium led to immediate leaving of Francois Hollande and German Foreign Minister Steinmeier.

“Facing terror, there is a nation that knows how to defend, able to mobilize its forces and, once again, will defeat the terrorists,” tweets Hollande, after the attack. He has even cancelled his visit for the G20 meeting in Turkey.

At least eight attackers have been killed during these attacks. As quoted by the New York Times, François Molins, the public prosecutor for Paris, said, “We are going to try and determine what happened, determine what the profiles of these terrorists are, find out what their course of action was, find out if there are still accomplices or co-attackers.”

Though the attackers are suspected to be terrorists, nothing has been officially confirmed. As revealed by French channel BFMTV, the attacker shouted, “It’s for Syria” and “Allahu Akbar” and even told about France’s military intervention in Syria.

Considering the series of attacks, security in France has been increased, especially in the border areas. However, the flight services are continuing as per the schedule with strict security at the airport. The police have advised people to stay indoors and the Paris metro has been shut down.

“Violence like this has no place in any city or country in the world. We’ve activated Safety Check, so if you’re in Paris you can mark yourself safe or check on your friends and family,” wrote Mark Zuckerberg on his Facebook page.