Petrol-diesel can be expensive by Rs 4-5 per liter in June, know why 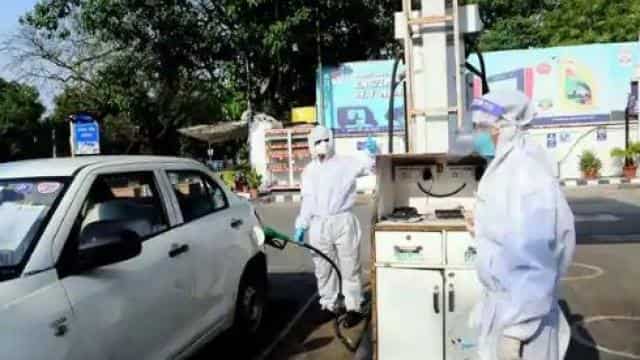 Despite the fall in crude oil prices, petrol-diesel rates did not come down. While the central government increased excise duty, many states also increased VAT on petrol and diesel. In such a situation, the common public did not get any benefit from cheap crude, now be ready for expensive petrol and diesel from June. According to the news of Live Mint, the public sector oil marketing companies may increase the prices of petrol and diesel by Rs 4 to 5 per liter. There may be a one-time revision of the daily value of both petroleum products after the lockdown is lifted.

40-50 paise a day can increase prices

Companies say that the difference between cost and sales in petrol and diesel has already reached Rs 4-5 per liter. In view of global prices, 40-50 paise per day will have to be increased for two consecutive weeks to meet the deficit. However, government sources say that the price of petrol and diesel cannot be allowed to increase beyond the limit.

Also read: Petrol and diesel will be expensive in this state from June 1, know today’s rate

Following the loosening of Lockdown 4.0, many states opened public and private transport, leading to increased demand for fuel. During the lockdown, VAT on petrol and diesel was increased in Nagaland, Karnataka, Delhi, Haryana, Punjab, Uttar Pradesh, Maharashtra, Jharkhand, West Bengal, and Assam and Odisha, raising petrol-diesel prices in these states.

Price will increase here from June 1

The Mizoram government has announced a hike in VAT from 2.5 percent on petrol and 5 percent on diesel from June 1, after which the prices of petrol and diesel in the state will increase. In Jammu and Kashmir, the tax on petrol has been increased by two rupees per liter. At the same time, the tax on diesel has been increased by one rupee liter. A state government spokesperson said the revised rates would come into effect from June 1. Himachal Pradesh has also announced a hike in rates on diesel and petrol from June 1.

Brainstorming on starting system of daily change in prices

According to official sources of the government oil marketing company (OMC), all retail oil vendors met last week. It assessed the current situation and prepared a roadmap to introduce a system of daily price changes after lockdown. Even if the lockdown is extended for the 5th time, the system will be implemented with the approval of the government.

Good news amid Corona crisis, Hyundai exports 5,000 vehicles in May