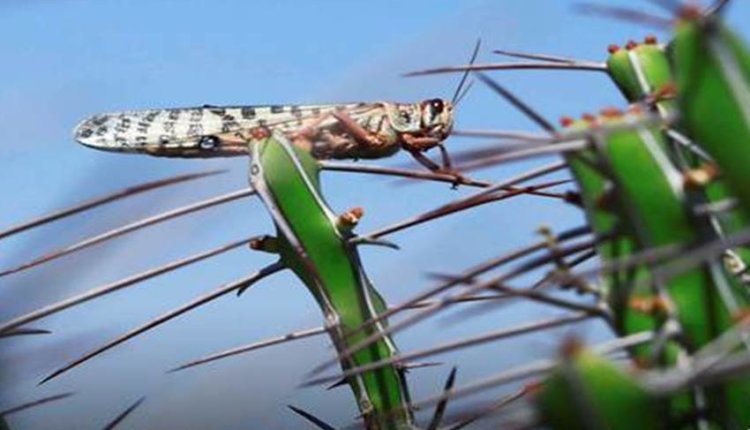 Locust parties have now raised concerns of farmers in some states facing Corona. Farmers in Rajasthan, Punjab and Gujarat have been doing everything from locust parties to spraying medicines to safeguarding their crops. This locust attack took place on behalf of Sindh province of Pakistan. Last year too, these grasshopper groups destroyed the crops of farmers in Gujarat and Rajasthan.

Rajasthan, Gujarat and Punjab are bordered by Pakistan. In the last three decades, grasshoppers flock from Pakistan have come to these border states and damaged India’s crops. This time these grasshopper parties have already attacked before the rain. Governments of Haryana and Uttar Pradesh have also become alert due to this fear. The Agriculture Department of Uttar Pradesh has issued advisory to farmers and departmental officers of their districts bordering Rajasthan and Haryana and asked to be cautious beforehand.

But the most impact of locust outbreak is seen in western areas of Rajasthan. A series of allegations and counter-allegations between the state and the central government regarding the locust outbreak has also started. During the video conferencing, Chief Minister Ashok Gehlot had mentioned this problem to Prime Minister Narendra Modi and sought help in the interest of farmers. They want the central government to spray insecticide in the locust affected districts of the state by helicopter.

Actually, Union Minister of State for Agriculture Kailash Chaudhary belongs to the Jaisalmer-Badmer region of Rajasthan. Locust outbreaks are highest in these districts. Chaudhary has accused the Gehlot government of being apathetic in the matter. Seeing the seriousness of the locust outbreak problem, Union Agriculture Minister Narendra Singh Tomar convened a high-level meeting this week. In which it was decided that the locust outbreak would be effectively dealt with by hiring drones.

According to Union Minister of State for Agriculture Kailash Chaudhary, last year locusts damaged bajra, jowar, guar, onion crops and other vegetables in Pali, Jodhpur, Bikaner, Jaisalmer, Badmer, Sriganganagar, Ajmer and Nagaur districts. This time the government is trying to stop the summer breeding of grasshoppers.

Fazilka district of Punjab is also affected. Millions of grasshoppers also wipe out the grass on the field they raid. Soon Chaudhary will soon be sprayed with pesticides in the affected areas. It is also planned to coordinate with the states and cooperate with the Border Security Force in preventing the outbreak of locusts.