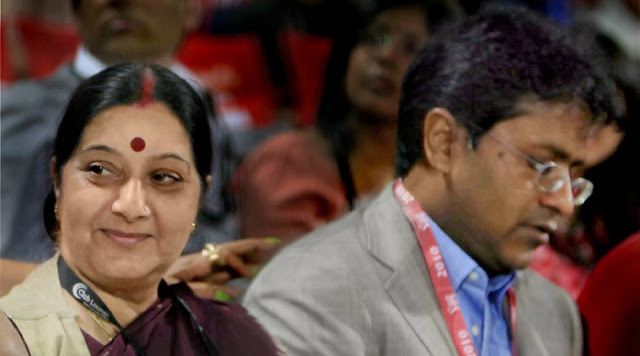 In the matter of External Affairs Minister Sushma Swaraj and
Lalit Modi, Former minister of UPA P Chidambaram has hit out at the current NDA.
Chidambaram said on Wednesday that why the central government is not bringing
him to India. The former finance minister, asked that who issued passports for Lalit
modi, the government should be transparent with such matter and should make
this and other documents public. Modi has been living on illegal passport
He accused the central government through seven questions.
He pointed out that in 2011 Lalit Modi’s passport had been revoked. So how is
he staying in London. ID told us that Lalit Modi is living in UK on illegal
passport.
The former finance minister said 16 cases are their against
Lalit Modi. If Lalit Modi is the new passport was issued, then who have done
it?. The government make that public. Chidambaram said, “The UPA has not
issued any notice. ED issued notices. But despite summoned Modi did not come. ‘
Words in the letters
Congress leaders said what kind of agreement has been signed
between the UK and the Government of India, Considering the importance of the
matter the government should make the documents public. Chidambaram said,
“I’d also dismissed the charges which said that Manmohan Singh was silent
on revelations of corruption. Modi ji charges are ridiculous. Whatever is in
the Letters I put them infront of you. “
Chidambaram said if the foreign minister helped Lalit Modi
on humanitarian grounds, then they could also ask to file petition in the Indian
High Commission. Why government has  not
told to come back to India. The government should ensure that Lalit Modi came
to India and then the charges against him to be examined by the ID.
indiapolitical
0
Share