#MALIATTACK: 80 PEOPLE FREED FROM THE 170 HOSTAGES TAKEN IN MALI 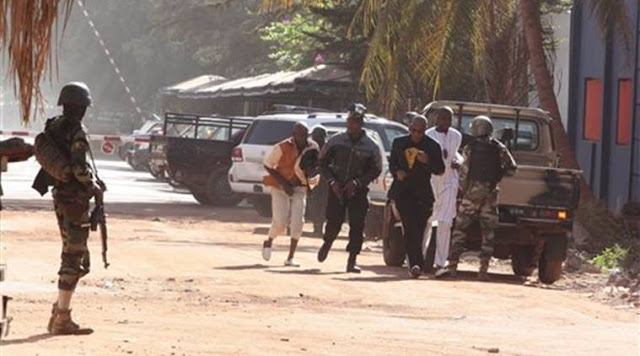 A few days after the Paris attack which killed 130 people, another shooting rampage happened at the Radisson Blu hotel in Bamako, Mali’s capital city in West Africa, where 170 people were taken as hostages on early Friday morning. Though the number of assailants in unclear, the rescue operation is still on.

Three people killed, two soldiers wounded and around 80 people have been freed by the Malian security forces. The French and the US Special Forces are also assisting in the rescue operation.
It all happened on Friday morning when the attackers came in a car with diplomatic plates and entered the hotel. The firing was heard from outside the hotel before they made their way into it.

Witnesses reveal that slogans like ‘God is Great’ and ‘Allahu Akhbar’ in Arabic were heard from the attackers. Out of the 170 hostages, 20 people were Indian nationals and 10 were Chinese nationals. As per the recent reports, the 20 Indian nationals have been freed.

Vikas Swarup, the spokesman of Indian foreign ministry, confirmed the same by tweeting, “Good news! All 20 Indians in the hotel in Bamako have been safely evacuated. Our Ambassador in Mali has confirmed. #MaliAttack.”

Six US citizens, 12 French nationals, four Chinese and two Germans are amongst the 80 people who have been freed from the hotel so far.

All the exit points of the hotel have been sealed by the security forces so that the assailants are unable to escape. Due to the terrorist attack, Mali President Ibrahim Boubacar Keita has cut down his regional summit trip in Chad.

As disclosed by Reuters, supporters of al-Qaeda-affiliated group have claimed the responsibility of the attack in Mali.