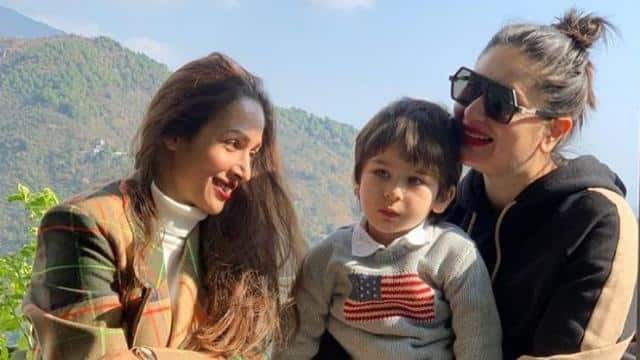 Bollywood actors Kareena Kapoor Khan and Malaika Arora are currently in Dharamshala, Himachal Pradesh. Actually, Saif Ali Khan and Arjun Kapoor have gone there for the shooting of the film ‘Bhoot Police’. Kareena, Taimur and Malaika have also arrived with them. Diwali celebrations have all enjoyed this time in Himachal. His photos and videos are becoming viral on social media.

Malaika Arora recently shared a photo with Taimur and Kareena Kapoor Khan, in which everyone is seen enjoying the winter sun. Sharing the photo, Malaika wrote, “The joy of the mountains”. Along with this he has tagged Kareena Kapoor Khan and written #TimTim.

Earlier, Kareena shared some pictures of her wandering the streets of Dharamshala, whose photo credit she gave to Arjun Kapoor. It can be seen in the photos that Timur is seen walking on his father Saif Ali Khan’s shoulder. However, the faces of both are not visible. The picture shows the cute bonding of father and son. At the same time, in the second photo, Kareena, Saif and Taimur are seen standing in front of the church. Kareena, sharing the photos, wrote in the caption, “Always looking forward.”

After two weeks, the market slipped, Sensex and Nifty on the red mark