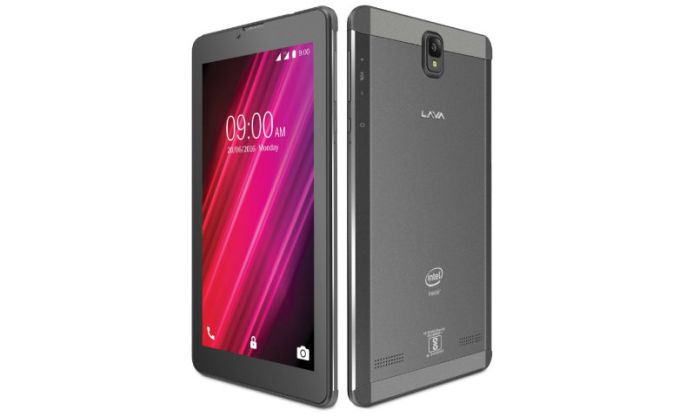 Lava, the Indian smartphone and tablet manufacturer, has launched an entry-level tablet in the country the all new Lava Ivory Pop. The tablet is aimed at the extremely budget conscious Indian and is a great option for those looking to buy a cheap tablet only for calling or primary purposes. Since the tablet is in the sub 7k segment, it does not boast of any unusual features but rather, sticks to just getting the basics right and providing a basic tablet experience. The tablet is clearly aimed at people wanting to purchase their first tablet or those interested in buying a second tablet or device for personal purposes. The Lava Ivory Pop tablet is a calling tablet so it can double up as a phone too and comes with all features that a standard tablet does. The need for budget devices is great in India, and homegrown brand aims to provide devices for this segment.

Coming to the features and specifications of Lava Ivory Pop, the device comes with an all-metal frame. Metal is the new word in the smartphone and tablet industry, and plastic is slowly going obsolete. Following this trend, Lava Ivory Pop too comes with a metal back. However, the device is not sleek as other all-metal device but does pack a little bulk. Lava Ivory Pop is almost 9mm thick. The tablet comes with Android Lollipop, which is quite a surprise considering there are very few devices that still sport the older Android version. However, for budget tablets in India, there seems to be a little option as most of them stick to Android Lollipop despite the world slowly moving to Android Nougat. But Android Lollipop is a stable version, and regarding functioning, there shouldn’t be any issues. The tablet comes with the standard power buttons and the 3.5 mm jack. While the 3.5mm jack on the top of the device, the volume, and power buttons are on the right-hand side.

Coming to the display of Lava Ivory Pop, the tablet comes with a 7-inch display with Dual Twisted Nematic technology and a pixel resolution of 1024  x 600 pixels. The pixel density is 171 ppi. According to Lava, “It’s 7 inch HD display with Dual Twisted Nematic technology is ideal to provide an immersive multimedia and mobile gaming experience.  The device delivers crisp, bright visuals under all angles and ambient lights. And, multi-finger touch and gesture support makes it easier to use than ever before.” Under the hood of Lava, Ivory Pro runs a 1.2GHz quad-core Intel ‘Sofia 3G-R’ Atom processor. The GPU is an ARM Mali 450 GPU. The tablet comes in just one internal memory variant, and that is 16GB. However, it does support further expansion up to 32GB. The tablet comes with 1GB RAM. Lava Ivory Pop comes with 5Mp rear end camera and a 2MP front camera. The tablet comes with a 3000 mAh battery.

The one thing missing in the device is 4G. With most devices – even the budget ones, now focusing on 4G as that seems to be the next big trend in India, there’s a lot Lava Ivory Pop is missing out on. Most device makers are cashing in on the 4G trend in the country. However, Lava seems to be focusing on an extremely niche segment and targeting just a limited audience with their new launch. During the launch of Lava Ivory Pop, Raman Sharma, Head – Tablet and IT Products, Lava International said,“Addition of Lava Ivory POP in the Lava tablet portfolio strengthens our resolve to make valuable technology accessible to our consumers. Lava Ivory POP provides next generation experience to consumers with its powerful combination of design and technology. With an advanced Intel Chipset, exceptional multi-media feature and economical price point, we are confident that Lava Ivory POP will become a favorite of consumers.”

Manasi Singh May 25, 2020
Filmmaker and director Karan Johar is celebrating his 48th birthday today. Karan Johar, who has directed films…

Film and TV industry to return to track soon; Producers Guild of India…