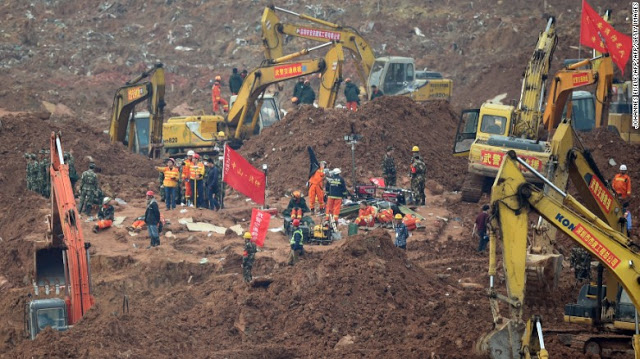 Tagged as the fourth major tragedy of China this year, the landslide in the industrial park of China’s manufacturing zone of Shenzhen left 81 people missing. Nearly 3,000 rescue workers have been employed at the site for the evacuation procedure. Only one body has been recovered after a continuous evacuation course over two days and was confirmed dead by the doctors. Though the survival chances of the 81 people, including 32 women, is little, the workers are using life detectors, drones and excavators in quest of people buried under the debris.

It all happened when a 100-meter man-made mountain, consisting of large pieces of cement, soil and waste materials from the construction sites, collapsed and engulfed almost 380,000 square meters of the nearby area. This portion included 33 buildings comprising of two office buildings, one cafeteria, three dormitories, 14 factories, and 13 workshops. Almost 600 people have been relocated and 16 were hospitalized due to the calamity on Sunday.

The ministry stated, “The pile was too big, the pile was too steep, leading to instability and collapse.” However, the residents of the place have blamed the government for not taking any preventive measures despite repeated complaints. People who witnessed the incident said that we heard like an explosion when the landslide happened and all they could see was dust and smoke.

The rescue workers are still encountering difficulties in the evacuation process as a major area has been covered with red mud. As quoted by a leading daily, a firefighter helping in the rescue work shared, “The rescue is extremely difficult with mud and silt filling up the excavation.”