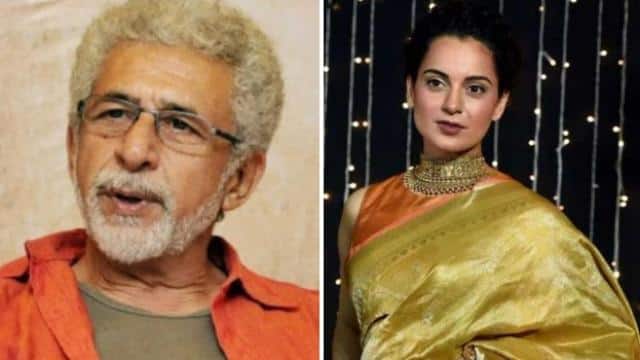 After the death of Sushant Singh Rajput, there has been a debate in Bollywood about nepotism. Meanwhile, Naseeruddin Shah gave his reaction on this matter. He had said that people whose mind is full of filth against the industry, are now vomiting in front of the media (everyone is blushing). Kangana Ranaut tweeted on this and targeted Naseeruddin’s statement.

Kangana Ranaut has written that thanks Nasir ji, you have lost all my awards and successes, in which nepotism is nothing. I have become addicted to all these things but would you have called me the same even if I were the daughter of Anil Kapoor or Prakash Padukone?

Thank you Naseer ji, you weighed all my awards and achievements which non of my contemporaries have on the scale of nepotism, I am used to this but would you say this to me if I were Parkash Padukone / Anil Kapoor’s daughter? 4 https://t.co/yA59q7Lwbf

After this, Kangana shared a video and wrote that Nasir ji is a great artist. The abuses of such a great artist are like the offerings of God. I look at the things in which me and Naseer ji had said good things about cinema. And I remember that you appreciated my work last year.

Naseer ji is a great artist, itne mahan kalakar ki toh gaaliyaan bhi bhagwan ke parshad ki tareh hain, I rather watch amazing conversation we had about cinema and our craft last year and you told me how much you appreciate me … 🙏 https://t.co/ZVXKVC4n66

During an interview recently, Naseeruddin was asked whether he thinks that this debate will bring some changes? So he said, this can only be expected, but the level of this debate is getting very childish. Why are we washing our dirty diapers in front of everyone.

Priyanka Chopra finished her biography ‘Unfinished’, will be launched soon

Director, who used to work with Riya Chakraborty, now said – his career is over

He further said that after Sushant’s death, people are debating about nepotism and ousides in Bollywood. Regarding Kangana Ranaut, she said that she is targeting some filmmakers and starkids, even tapping actors like Taapsee Pannu and Swara Bhaskar as B grade.

Naseeruddin further said, ‘Now people are raising their voice even after not appearing on the poster. If all of us started to shrink then this industry would be known as the worst place on earth. Let us know that recently Deepak Dobriyal complained of not getting a place on the poster of the films.

After 30 years, you will get 4 crores, just have to invest here, know full information