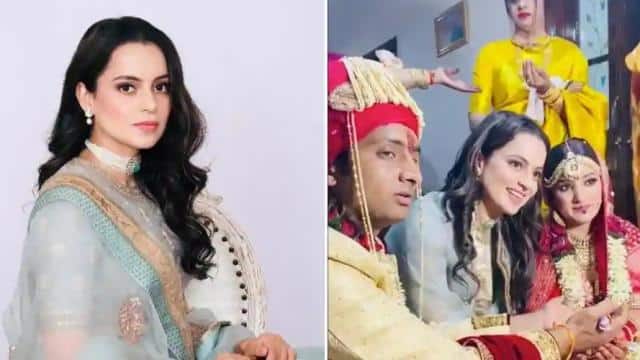 Bollywood actress Kangana Ranaut has been sharing pictures and videos for the wedding of cousin Karan for the last few days. Now he has written a video post and an emotional post for his sister-in-law. Along with this, he has shared a video during Karan’s wedding which is being very well liked.

Kangana Ranaut shared the video on Twitter account and wrote- ‘Bless Karan and Anjali. Today our daughter has come to our house, but when I think of Anjali’s parents, her heart becomes heavy, today her house will be deserted, she cut a part of her heart and gave it to us, today her daughter’s room is empty might have happened. There is no more donation than charity.

Bless Karan and Anjali, our daughter has come to our house today, but when I think of Anjali’s parents, her heart becomes heavy, today her house will be deserted, she cut a part of her heart and gave it to us, Today his daughter’s room must have become empty, no more donation than donation. pic.twitter.com/rcPkq75NRP

Earlier, Kangana shared a video of turmeric ceremonies in which she was seen applying turmeric to brother Karan. Kangana shared the video, writing, “It has been more than a decade, there has been no marriage at home since Rangoli’s wedding, but today our house turned into a wedding celebration because of our brothers- Karan and Akshat Done. Two weddings are due in three weeks, today Karan has turmeric. “

It is worth mentioning that recently Kangana Ranaut had told that she has started training for ‘Tejas’ and ‘Dhakad’ films as well. She also shared a video of it in which she was seen training with the trainer. Earlier, she was busy shooting for the film Thalaivi. The film is based on the life of late political leader Jayalalithaa.

Big announcement of the central government, 30 lakh government employees will be given bonus of Rs 3737 crore before Dusshera