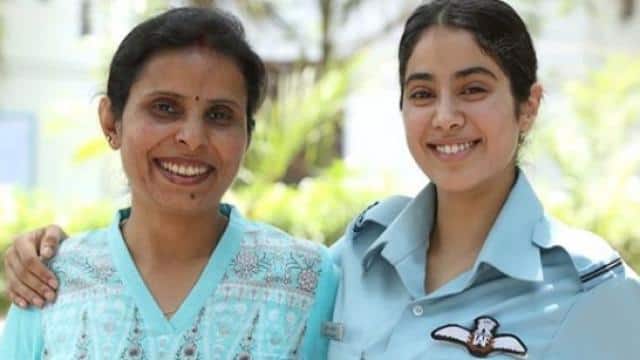 Bollywood actress Jahnavi Kapoor’s upcoming film is titled Gunjan Saxena. The film is set to release on Netflix however, no release date has been announced yet. In this, Jahnavi Kapoor will play the role of Gunjan Saxena, the first female Air Force officer of India.

Recently, Gunjan Saxena and Jahnavi Kapoor told many things about the film and their journey during an interview. Gunjan Saxena said, “At that time there was no separate washroom or changing room apart from the constraints of the infrastructure, which gradually got noticed. The most difficult thing was to break the mental barriers of people, so that they can accept a woman as an officer. Women should be accepted only as officers, not as women officers. I think that was also the most challenging and exciting part. ”

Jahnavi Kapoor said, “All this, the hard work with which you have worked hard for your work, is visible.” Your approach was very simple, if you keep working hard, you will get what you want. Jahnavi said that as Gunjan Saxena did not let the creation of the society or gender bias or anything obstruct his mind or he never even tortured himself, instead instead of focusing hard on his work only by working hard Forced the society to accept its merit, which inspires me the most. ”

He further said that I am aware of my privilege. I often feel giddy about it, but if I can do something good, it is hard and honestly I can earn my place by doing my work. Pankaj Tripathi and Angad Bedi will also be seen in important roles in the film Gunjan Saxena The Kargil Girl directed by Sharan Sharma.

24 carat gold bought for just 1 rupee, many companies including Paytm are giving opportunity

ICICI Insurance will not worry about the claim, money will also be given for treatment at home