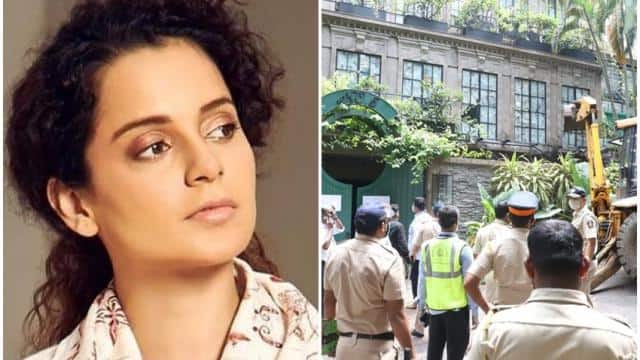 Actress Kangana Ranaut, who has been vocal in the Sushant Singh case between the Shiv Sena dispute, is reaching Mumbai on September 9 with Y category security. Even before he reached Mumbai, the BMC ran JCB at his office and ransacked. Kangna has left her home market from Mandi this morning and it is expected that she will reach Mumbai by around two and a half to three o’clock. At present, JCB of BMC has been run at Kangana’s office and it is being told that BMC employees have now left after ransacking the office. Here Kangana also approached the Bombay High Court against the action of BMC, on which the hearing is going on. So let’s know what happened in the altercation between Kangana and Shiv Sena today.

1. The Shiv Sena-ruled Brihanmumbai Municipal Corporation (BMC) on Wednesday dropped alleged illegal constructions in actress Kangana Ranaut’s bungalow in Bandra. The demolition of this office started shortly after 11 am. Earlier, the BMC had given a second notice giving information about the action of the BMC outside the bungalow. The BMC team arrived at Bandra’s Pali Hill bungalow carrying bulldozers and JCB machines and demolished the alleged illegal structure in Kangana’s office.

2. When the video and pictures of this action of BMC came out, then a large number of police forces and staff were seen at that time. The BMC team with Hammari and JCB broke the alleged illegal construction. However, Kangana claims that her office is not illegal.

3. Kangana will reach Mumbai by around 2:30 pm. He has alleged that the Maharashtra government is targeting him because he is at loggerheads with the Shiv Sena. Kangana in another tweet shared pictures of the municipal personnel outside her bungalow and wrote, ‘Babur and his army.’

4. Regarding the sabotage at the office, Kangana wrote on Twitter, “I was never wrong and my enemies have proved this again and again and that is why Mumbai is now Pakistan-occupied Kashmir (PoK)”. Kangana has been given Y-class security by the Union Home Ministry and she will be guarded by 10 armed commands. He also shared pictures of BMC employees engaged in demolition.

6. Before flying from Chandigarh International Airport, Kangana tweeted, ‘When I am preparing to go from Chandigarh Airport to Mumbai, then the Maharashtra Government and their goons have illegally reached to break my property, okay go ahead. I have promised to give blood for the pride of Maharashtra. It is nothing, take everything, but my courage will increase day by day. ‘

7. Troubles have increased for Kangana as the Maharashtra government said on Tuesday that the police would investigate allegations that Kangana had taken the intoxicants. At the same time, changes in Kangana’s bungalow are also under the scrutiny of the Municipal Corporation. Home Minister Anil Deshmukh said that the Mumbai Police would investigate actor Sudhan Suman’s allegations that the actress had taken narcotics.

8. Actually, there was a verbal war between Kangana Ranaut (33) and Shiv Sena MP Sanjay Raut last week when Sanjay Raut said that Kangana should not return here if she feels insecure in Mumbai.

9. In the past, Kangana Ranaut compared Mumbai to Pakistan-occupied Kashmir (PoK). Kangana wrote on Twitter, ‘Sanjay Raut has openly threatened me and asked not to come to Mumbai. The murals of freedom in the streets of Mumbai and now open threat, why is Mumbai giving a feeling like Pakistan occupied Kashmir? ‘

10. Kangana further challenged Sanjay Raut and said, ‘You are not Maharashtra. You cannot say that I condemned Maharashtra. Sanjay ji, I am coming to Mumbai on 9 September. Your people are saying they will break my jaw, kill me. You kill me because the soil of this country has been watered with such blood. Not knowing for the dignity of this country, how many people have given their lives and we also have to pay our debt. See you on September 9 Jai Hind … Jai Maharashtra. ‘