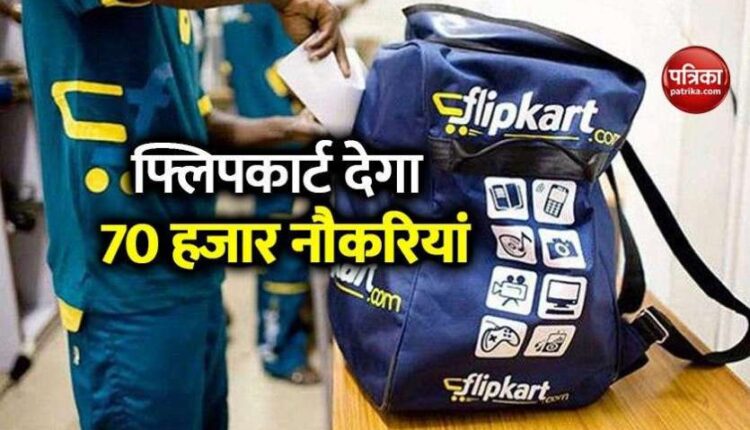 new Delhi. In the festive season, from the world’s largest ecommerce sites Amazon to India’s largest ecommerce sites Flipkart has already started preparations. The reason for this is that the business of e-commerce industry has increased in the era of Corona virus. People are shying away from going to the market. More and more people are busy in online shopping. In such a situation, preparations have started from all companies. While on one hand, Amazon has announced to give jobs to 1 lakh people. In such a situation, Flipkart has also announced to make 70 thousand recruitments to further strengthen its supply chain.

70 thousand people will be recruited
E-commerce giant Flipkart said on Tuesday that it will help people to get 70 thousand direct and lakhs of indirect jobs in this festive season. The direct jobs will be under the supply chain and for this, delivery executives, pickers, packers and shotgers will be recruited. Apart from this, employment will be generated at Flipkart’s seller partner location and grocery stores.

Customers have a great experience
Amitesh Jha, Senior Vice President, ECart and Marketplace, Flipkart, said that we will create opportunities for everyone on our Big Billion Day. We will try to influence the entire ecosystem. Our aim will be to give customers a great experience and under this, many people will join us indirectly and indirectly. Flipkart will connect more than 50 thousand grocery stores for Last Mile Delivery and will create thousands of jobs for delivery of grocery encounters.

Amazon has also announced one lakh jobs
A few days ago, Amazon has also announced to open one lakh jobs. According to the company, the new recruits will be both temporary and permanent. New employees will be hired for the packing, delivery or sorting of orders. The company was already to hire 1,75,000 people this year. Last week, the company said it had 33,000 corporate and tech jobs on which it had to make appointments.

After this decision of the government, onion will be very cheap, know how much will be the price