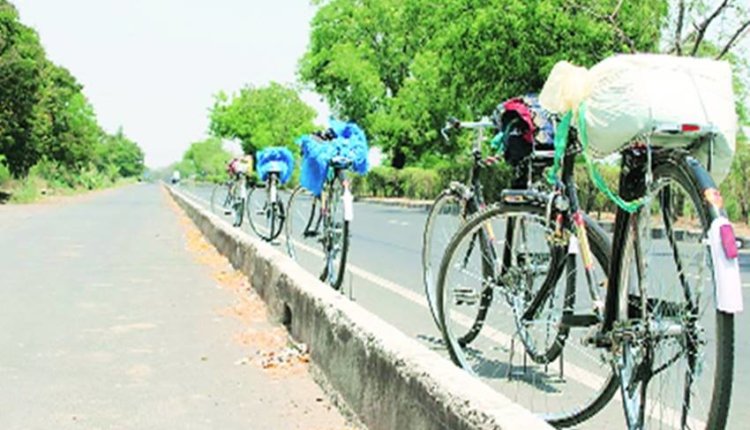 To get the first glimpse of his newborn son, a father has decided to cycle 1800 km between lockdowns. Due to the lockdown, Lal Dev, a resident of Gorakhpur, who has stopped the traffic, has set out on a bicycle from Vijayawada in Andhra Pradesh. He has covered a distance of 750 kilometers so far. Amid the enforced lockdown in the country, his wife gave birth to a son. In the hope of getting the first glimpse of the son, he has walked the cycle to measure such a long distance.

Along with them, three more people have left the cycle to go home. This group of four is going on day and night. When these people left from Vijayawada for Gorakhpur, they had 40 thousand rupees. Out of this, 10 thousand rupees have been spent during the journey. After the government could not reach these people, these people bought four bicycles for five thousand and then started on the journey. The journey started well and was given a lift of 250 km by three truckers. Apart from this, these people cycled 500 km.

According to The Hindu newspaper, Dev Lal says that if we have good luck, we will get some more good truckers so that we can go further soon. Kalyan Anand, who is distributing and helping people along the way, says that for the past one week, I have seen more than 25 people flocking on the National Highway 16 by bicycle or on foot.

When Amitabh Bachchan burnt his hand on Diwali, there was trouble for two months