Father came out on foot on the news of the death of the child, if the police stopped then spent 3 days crying on the road 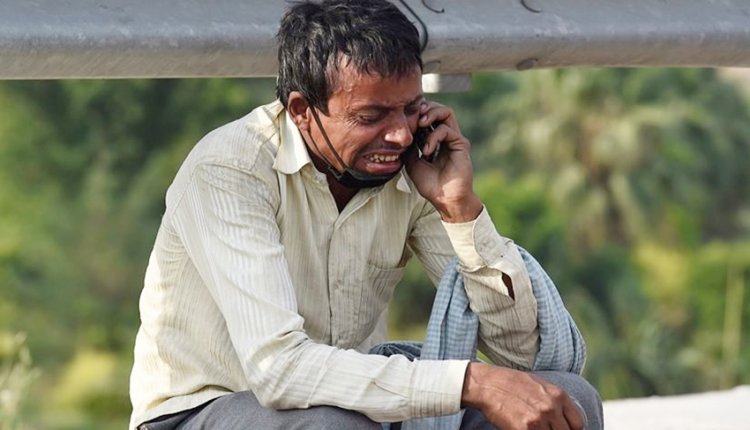 Migrant Crisis: The worst impact of increasing cases of coronaviruses across the country has been on migrant laborers. Migrant laborers who had lost their jobs due to strict lockdown rules, were stuck and could not go home on time despite the emergency. A similar story is that of Ram Pukaar Pandit, a resident of Nawada in Bihar. This week his wife informed Rampukar, who works in Delhi, on the phone about the death of her 1-year-old child. Before this news, much desperate Ram Pukaar started traveling to Bihar on foot to see the child for the last time after not getting any vehicle service. However, his journey could not extend beyond Ghaziabad, as the police did not let him go home even after lakhs of pleas.

A photo of Ram Pukar is becoming viral across the country through social media. In this, he can be seen crying while talking to the phone. Ram Pukar alleges that after getting out of Delhi, close to the UP gate, he was stopped by the UP police and did not let him go further. In such a situation, he had to spend the next three days sleeping under the Ghazipur flyover. During this time, Ram Pukar demanded the policemen and officers to go to Bihar. However, no one paid attention to these incidents.

What’s the situation in Bihar from Corona, click and learn

Ram Pukar says that even when the police did not listen to him, some NGO workers and some policemen gave him food. After spending three days under the flyover, the authorities finally rushed him to the Delhi railway station, from where he caught a labor special train going to Bihar. Ram Pukar has now reached Begusarai in Bihar. However, she is kept at school to investigate coronaviruses.

According to Ram Pukar, he hopes to meet his family soon. However, he still has his struggle near the UP border, because without him the family had to cremate his child and now he would never see his son. Ram Pukar says that he has been crying for the past several days and his wife and three daughters are constantly worried.