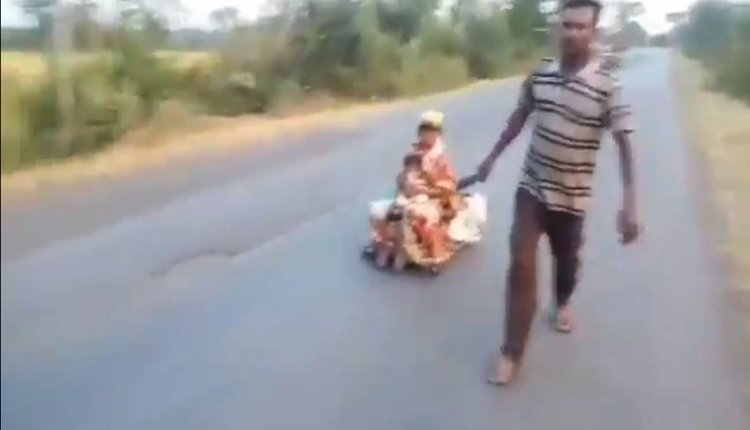 People are facing a lot of difficulties due to the lockdown implemented across the country due to the spread of the corona virus. The country has seen pictures of migrant laborers. Workers from different corners of the country have left for their homes on foot, trucks and whatever means are available. It is locked on eating and drinking and life, so they have no choice but to go home. In such a situation, a video is being played on social media in which a laborer is dragging his pregnant wife and two-year-old girl on a wooden carriage made by them towards the house.

According to a report by TV news channel NDTV, the man lived in Hyderabad and after finding all the options could not afford to go home, the migrant laborer left with his wife and child. It made a car with bamboo and wood lying on the way and came out 800 km away, sitting on it and dragging the wife and the girl.

One of Balaghat #worker Who used to work in Hyderabad from a distance of 800 km, sitting in a hand-made wooden car with his 8-month pregnant wife, with his 2-year-old daughter, pulled the car and reached Balaghat @ndtvindia @ndtv #modispeech #selfreliant # Covid_19 pic.twitter.com/0mGvMmsWul

The name of this migrant laborer is Ramu. He told that he walked for 17 days on a hot afternoon after which he reached Balaghat. He told that the couple saw this couple coming on the Rajegaon border of the district, after which they helped them. The daughter did not even have slippers in her feet, after which the policeman provided the girl with slippers and then arranged for a private vehicle to reach Ramu’s family home.

#WATCH Coming on foot from Maharashtra, Bhiwandi, I have to go to Jaunpur. It has been 8-9 days since we traveled to the people. Eat food as long as there was money, when the dying situation happened, people walked on foot. On seeing the child on the way, people used to give them little to eat: Balakrishna, handloom worker #Bhopal https://t.co/OKQW61QZHO pic.twitter.com/vFgPeb536a

There is a similar story of Balakrishna who left from Bhiwandi in Maharashtra to Jaunpur in Uttar Pradesh. He told news agency ANI that I am coming from Maharashtra, Bhiwandi on foot, I have to go to Jaunpur. It has been 8-9 days since we have been traveling to people. Took food as long as there was money, when the dying situation happened, people walked on foot. On seeing the child on the way, people used to give a little food Balakrishna said that if he lived there, he would die of hunger. When they asked for help from the factory owner, they used to say go home. We had no way, so we chose a walking path.