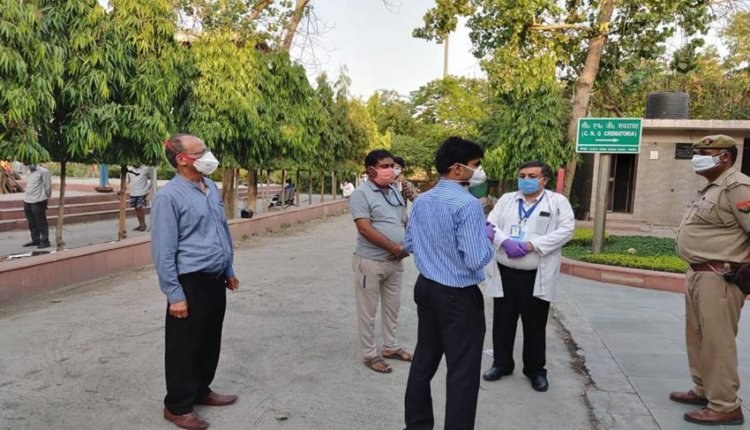 An elderly man suffering from corona infection died in hospital late Monday in Gautam Buddha Nagar. The DM conducted the last rites in the presence of police-administrative officers if there was no member of his family here. The daughter of the deceased lives in Gujarat and she could not reach here.

The elderly couple Ashok Kumar Singh (60) and his wife Neelam Singh, living in Sector-19, Noida, realized that they had symptoms of corona infection. After this both of them contacted the doctor. On May 5, the Health Department sent the elderly couple to the segregation center of Galgotia University. The reports of both came on 8 May, in which both were found infected. After the infection was confirmed, the husband and wife were admitted to Sharada Medical College, Greater Noida.

Both were normal till Monday evening but at around five o’clock the condition of the elderly suddenly worsened. When the doctors investigated, it was found out that he had a heart attack. Shortly he was admitted to the ICU and placed on a life support system. He died late at night. Ashok Kumar died in the hospital late on Monday night. No relatives could reach him for his last rites. His daughter Som Lata Singh, living in Gujarat, called the District Magistrate and told him his problems.

District Information Officer Gautam Buddha Nagar Rakesh Chauhan informed that on this the District Magistrate himself reached the last residence of Sector 94. There he paid a heartfelt tribute to the deceased Ashok Kumar Singh on behalf of all the residents of the district. Municipal magistrate Umashankar Singh, officers and staff of the police and health department were present on the occasion. The last rites were performed through a CNG machine.