Corona Vaccine to be available to Underdeveloped Countries by 2022, said Bill Gates 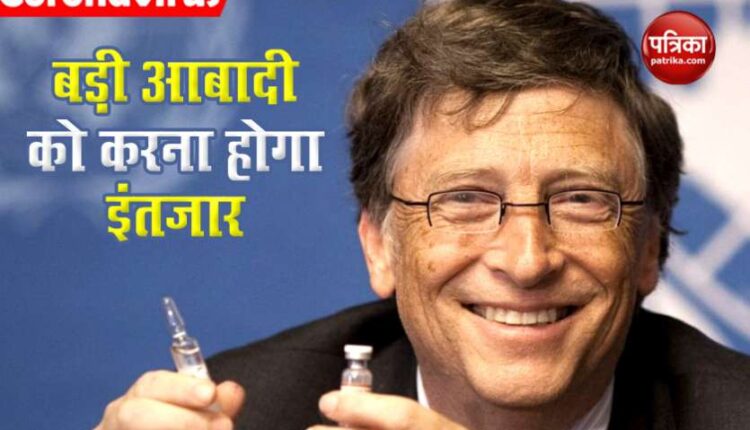 new Delhi. A large population of the world may also have to wait until 2022 for the Coronavirus Vaccine. Not this thing, we have to say the second richest person in the world and Bill Gates, co-founder of Microsoft company. They believe that work is going on around the world. Vaccine availability in developed countries will be available by 2021. At the same time, the availability of vaccines for underdeveloped countries i.e. poor countries and developing countries is expected by 2022. This means that the outbreak of Coronavirus Pandemic in the world is going to continue. Let us tell you that on Tuesday, The Economist organized a webinar, in which there were many important things about the vaccine towards Bill Gates. Let us also tell you what he said …

We had succumbed to Corona
Bill Gates said in the webinar that we had already succumbed to the corona virus. Because of which we could not stand ahead of this infection. He said that all of us proved to be completely unsuccessful in understanding the nature of the epidemic or rather, nature. He said that where countries like South Korea and Vietnam showed cleverness, promptness and courage. On the other hand, Asian countries tried and worked much better than American and European countries. Whereas when the epidemic came out of China, it made big mistakes in the beginning. At the same time, he has told the two big countries of Asia, India and Pakistan to be in great danger right now. There is an increase in the number of corona infected people in India from 65 to 70 thousand daily.

Also read: One crore sugarcane farmers of the country will be gifted by the government, the price increases by 10 rupees per quintal

Poor countries may have to wait till 2022
The corona vaccine has been announced in Russia, but its third phase trial is underway. Bill Gates said the corona vaccine had initial success. Now the human trial is moving towards the third phase. He speculated that the Corona vaccine would arrive in the country in the first quarter of 2021. In some places, it may take longer than this. However, by the second quarter of 2021, it will come into the hands of the people of the developed countries or, say, rich countries. Talking about poor countries, they may have to wait till 2022. This wait may extend to the first or second quarter. This means that a large population of the world may have to face the havoc of Corona for a long time.

90 thousand crores may be spent
Bill Gates said that the Corona virus vaccine is being discussed all over the world. Work is going on in some countries. Work is in progress at level 6. He said that it could cost 75 to 90 thousand crores to make this vaccine. Perhaps more than that, but to save billions of billions of rupees and save human life, this expenditure is very important. So that the lives of crores of people can be saved. Many companies are also working on medicines to enhance the immune system in place of vaccine. This is also very important.

Corona vaccine up to Rs 250
Bill Gates said that the corona vaccine was required to be available to all. Whether it is rich or poor. It is important for everyone to have the right. It is necessary that its price is very reasonable. He said that this is the biggest challenge. He believes that a vaccine of Rs 250 is very important for everyone in the world. He said one more thing that 80 to 90 percent of the people do not need to apply like measles vaccine. Even if it takes 30 to 60 percent of the population, the epidemic can be controlled.

Investment in PPF can make millionaires, not even a mess of tax, know how to open account