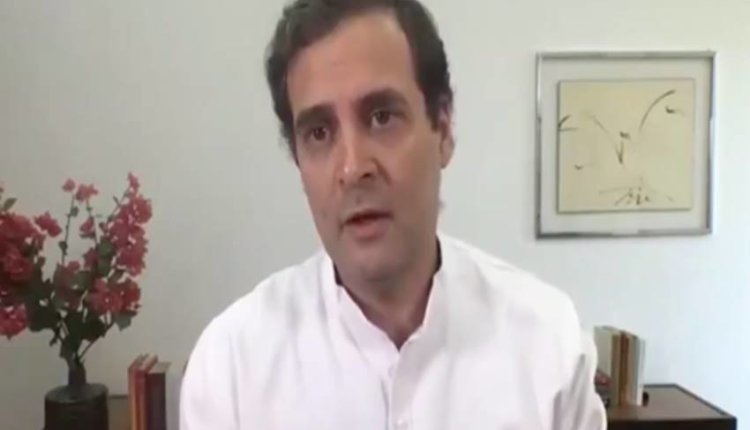 On Saturday, amidst the Corona virus crisis and lockdown, former Congress Chief Rahul Gandhi took to the streets of Delhi and met migrant laborers migrating from house to village. When he reached near Sukhdev Vihar flyover in Ashram area of ​​South Delhi, he found many laborers there. During this time, Rahul took his movement and heard the problems. On this meeting of Rahul with the migrant laborers, the Congress Twitter handle was told – Only those who worry about the public can understand their pain. Today, Rahul Gandhi met the migrant laborers in Delhi.

Meanwhile, the Congress has alleged that the workers whom Rahul met, were later taken into custody by the police. Anil Chaudhary, who is associated with the Delhi Congress, claimed that we found out whether the workers were taken into custody. Rahul came and met him. We spoke to the police, after which two people were allowed to go together. Our volunteers are going to leave the migrant laborers home now. We are sending two people together.

However, the news agency ANI quoted police sources as saying that the arrest of those workers is wrong. They are still there. Congress workers had asked to provide them vehicles, but according to the rules, they cannot be allowed to go together. This is because they are in large groups.

A laborer named Monu, going from Haryana to Jhansi, told ANI, “Rahul Gandhi met the laborers going near the flyover. The workers of his party later arranged for the carriage to take the laborers to the village. ” At the same time, a migrant named Devendra said – Rahul met us half an hour ago. He booked the car for us and asked us to get him home. They also provided us food, water and masks etc.

Meanwhile, Union Minister RK Singh said that he (Rahul Gandhi) remembered meeting the laborers after 50 days? Our government (in the center and states) is engaged in arranging food and trains for them. We gave them ration and also transferred money to the accounts. He had just arrived to do a photo session with her. There should be some sensitivity.

#WATCH Union Min RK Singh reacts on Rahul Gandhi meeting migrant labourers in Delhi. Says “Did he remember migrant labourers only after 50 days? Our govt, at center & in states, has been arranging food, trains for them… He met them just for photo-op.There should be some sensitivity ” pic.twitter.com/9iqgRuIRez

Earlier in the day, Rahul appealed to the Modi government to transfer cash to people (especially laborers) in this crisis. In fact, the Center recently announced an economic package of 20 lakh crore rupees to settle the system of extreme country after Corona and lockdown, on which the former Congress Chief has asked the Center for reconsideration.

He also said that the lockdown needs to be opened with prudence and caution and special care should be taken of the elderly and people suffering from serious diseases and should be prepared to combat the ‘storm’ in the economy.

Gandhi told reporters via video link, “The package that should have been there should not have been a package of debt. I am disappointed about this. Today, there is a need to put money directly into the account of farmers, laborers and the poor. ”

Click on these links to know more news related to Coronavirus / COVID-19 and Lockdown: Why is the tax on alcohol important for the states? Know, what is its economics and who earned from UP to Tamil Nadu. 500 crore daily income from liquor, Kejriwal government imposed 70 percent ‘special corona fee’. After the lockdown, the guidelines prepared for the journey in metro and buses, know what rules have to be followed. In India, the number of corona patients is beyond 40 thousand, if you want to avoid the virus, then tie these 5 things. Ayurveda recourse in battle with Corona, approval for trial of Ayurvedic medicine.

After completing 3 months of daughter, Shilpa Shetty shared a photo and wrote- My Princess

When such incident happened with ‘Laxman’ while having lunch on the set of ‘Ramayana’, the shooting had an impact