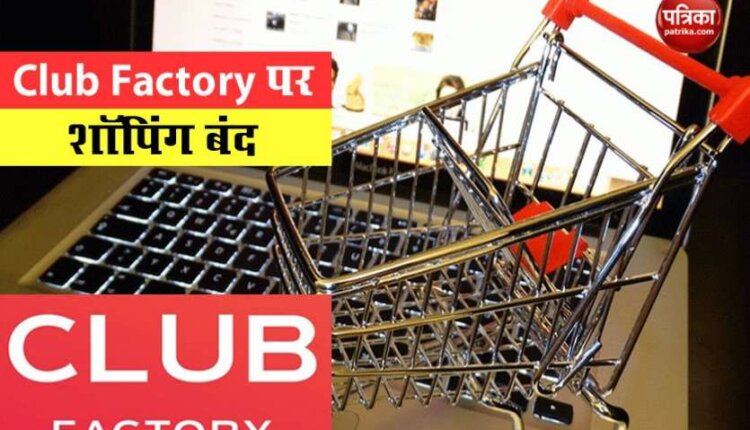 new Delhi: E-commerce companies like Club Factory, Shein and Romvi (E-Commerce) were taking shipping orders from Indian customers, despite the ban on 59 Chinese apps (59 Chinese Apps Ban), but lastly today E-Commerce Company Club Factory Has stopped its operation in India. The company mailed Sellers to Bill Payment hold and said that due to the ban imposed by the Government of India, it is currently stopping its work till the removal of this ban.

SBI employees will get permission to work from anywhere, saving Rs 1000 crore

Crores of Sellers Stuck – Let me tell you that currently the company owes crores of rupees to the sellers and Logistic. In the figures, Rs 60 crore for Sellers and Rs 100 crore for Logistic are stuck.

Sellers say that the company has not paid them before the ban and after the ban, they have officially said to stop the payment.

Shemaroo launches new scheme when Multiplex is closed, do not watch movies without subscribing

In addition to Club Factory, Shein has also ceased operations in the country from 11 July. Shein says he is negotiating with the government and showing them valid documents to allow them to work.

Of the 59 apps that the government has closed, 4 are shopping apps and Club Factory is the largest among them. It is also to be noted here that despite the ban, these apps managed to dodge these sites for some days using some techniques and were constantly ordering orders from customers.

Aadhar Card will be ready in minutes with the help of Virtual ID, know what is the complete process

Banned app for security On 29 June, the Government of India closed 59 Chinese apps in view of the country’s security and sovereignty.