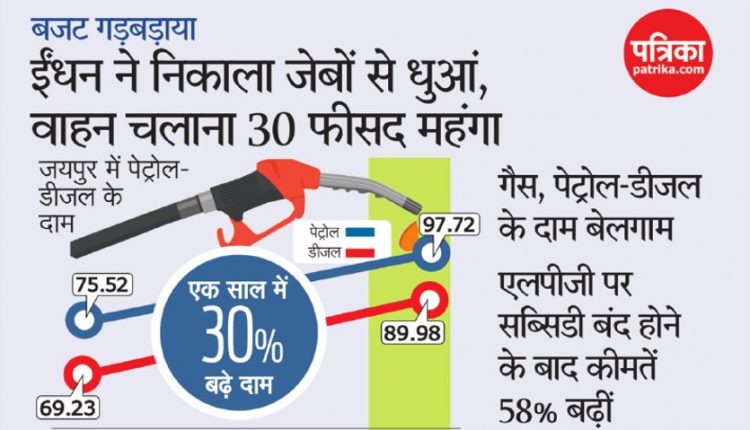 Jaipur . The unbridled prices of LPG and Petrol and Diesel in the Corona era have increased the difficulties of the common people. Due to increase in fuel prices, everyday items are also becoming expensive. After the recent increase in the prices of petrol and diesel, driving has become more expensive by 30 percent.

The budget of common people has also been disturbed by the constantly increasing gas cylinders. After April 2020, the subsidy on domestic gas cylinders is being unannounced, and people are paying 58 percent more price. Commercial cylinder prices have also gone up by Rs 25.38 to Rs 1,625 from Rs 1,296.

The cost of the cylinder is Rs. 25. Increased
New Delhi. The public suffered a major setback on the first date of March. LPG gas cylinders became more expensive on Monday. The price has gone up by 25 rupees. The price was raised three times in February. After increasing the price on the first day of March, the gas cylinder has become 819 rupees. Earlier, on February 4 and 25, the price of 14.2 kg cylinder was increased by Rs 25-25, while on February 15, it was increased by Rs 50. Since December, its price has increased by Rs 275. Gas prices are reviewed at the beginning of every month and on the 15th day. Prices are decided on the basis of this. ‘Chulha Phunko …’ Congress MP Rahul Gandhi took a jibe at the Modi government over the rising cost of cooking gas. He tweeted, ‘LPG cylinder prices again go up. Now the Modi government has only three options for the public – shut down the business, burn the stove and eat jumle.

Petrol and diesel did not become cheaper even after crude oil became cheaper, know today’s price

Big relief for Modi government for 5th consecutive month, know how much earned from GST collection