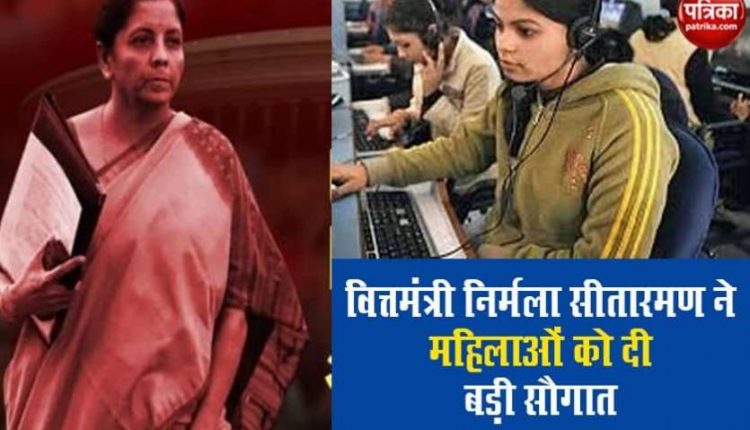 new Delhi. Finance Minister Nirmala Sitharaman presented the budget of the country today at 11.00 am on February 1. In which he announced many big plans for the countrymen. With these schemes, Nirmala Sitharaman has given a big gift to women in her general budget 2021. Under this, they have announced for women that they will now be able to work in all shifts at all workplaces. Then even if there are night shifts. But women working in night shifts will also be provided security with adequate facilities.

The Finance Minister has announced to add one crore more beneficiaries under the Pradhan Mantri Ujjwala Scheme. This will benefit those women, who are still forced to cook in the stove. Apart from this, it has also been announced to introduce gas pipeline scheme in Kashmir.

The scheme was launched by the Central Government on 1 May 2016 under the name of “Pradhan Mantri Ujjwala Yojana” with the slogan of “Clean Fuel, Better Life”. The scheme is working towards realizing the vision of Smokeless Rural India. This scheme had benefited women who were living below the poverty line, LPG connection was made available to 5 crore families by the year 2019. And at present more than eight crore families are getting the benefit.

Finance Minister Nirmala Sitharaman made two big announcements for women, focusing on home for all and empowerment of women, for them to work on every platform and pay full attention to their safety.

The Finance Minister said that it is the government’s target to provide houses at a subsidized rate so that everyone has their own home. For this, the scheme of interest exemption on the amount of loan up to Rs 1.5 lakh was extended for one year.

Budget 2021: Disappointment of middle class on hope of economy coming back on track, know 10 big announcements