Bollywood round up: read, today’s 10 big news of entertainment and gossip 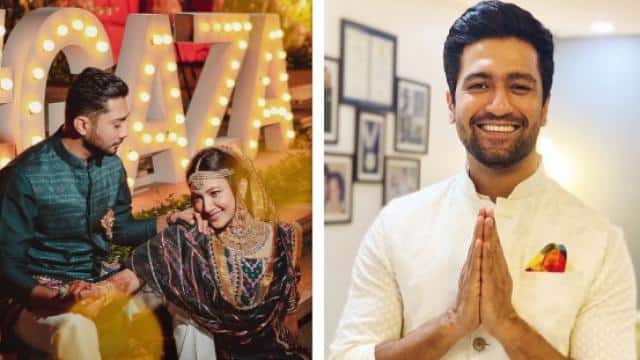 1. Before Nikah Gauhar Khan did makeup for Zaid court, this video will win your heart

Gauhar Khan has tied the knot with fiance Zaid Darbar on Friday. Many pictures and videos of this wedding ceremony are going viral on social media. Meanwhile, a video has surfaced in which Gauhar Khan is seen doing makeup of Zaid. It can be seen in the video that Gauhar Khan is putting a foundation on Zaid’s face. His style is being well liked. After Zaid’s make-up, Gauhar herself seems to be getting ready. This video is before Nikah, which is going viral on social media.

Bollywood actor Vicky Kaushal is in the news for a relationship with Katrina Kaif. On the occasion of Christmas, Katrina Kaif held a party at her house, which also included Vicky Kaushal. Apart from this, Karan Johar, Ananya Pandey, Siddharth Malhotra, Kabir Khan, Ishaan Khattar, Angad Bedi and Neha Dhupia also attended this party. Vicky Kaushal and Katrina Kaif were often spotted together before the Corona epidemic. Some time ago in an interview with Midday, Vicky Kaushal said, “There is no harm in dating. It is a beautiful feeling.” I understand that the paparazzi are doing their work. ‘

Anurag Kashyap and Anil Kapoor’s film AK Vs AK has been released on Netflix. The film is directed by Vikramaditya Motwani. Anil and Anurag play their own roles in the film. The special thing is that a film is going on inside this film too. At the beginning of the story, Anurag Kashyap and Anil Kapoor fight during a media interaction. Both make personal comments on each other. Even Anurag throws water on Anil Kapoor’s face in front of everyone. This fight of both of them comes to the headlines. Now that Anurag Kashyap wants to teach Anil Kapoor a lesson, he kidnaps Sonam Kapoor and gives Anil Kapoor the task that he needs to find Sonam within 10 hours. Now whether Anil Kapoor can find Sonam or not, you will have to watch the film.

4. Kangana Ranaut’s sister-in-law is the ‘Instagram queen’ of the house, the actress explained the reason

Bollywood actress Kangana Ranaut often shares family photos on social media. Now he has shared photos of Family Trip. In the pictures, Kangana is seen having fun with the family. Along with this, Kangana has told about a hidden talent of her sister-in-law. Kangana has shown a glimpse of the family trip on Twitter account. Kangana’s sister-in-law Ritu, sister Rangoli, nephew Prithviraj are seen together in this trip. Kangana shared the pictures on Instagram account and wrote, “Yesterday went hiking with the family. It was a great experience. “Next, Kangana wrote,” My sister-in-law is the Instagram queen. She knows about all the filters and she taught me how to use them. ”

5. Shahrukh Khan’s daughter Suhana gets this special gift on Christmas, seen in video

Superstar Shah Rukh Khan’s daughter Suhana Khan is very active on social media. Even though he has not made his Bollywood debut, he has a tremendous fan following on social media. Suhana has shared a video on the occasion of Christmas in which she is seen flaunting earrings found in a gift. Suhana Khan has shared this picture on Insta Story. In the photo, she is seen flaunting her earrings which she received in a gift over Christmas. This photo of Suhana shows that she was dressed up on Christmas. He has shared a gift emoticon with posting photos.

New twists are seen every day in reality show Bigg Boss 14. Recently Nikki Tamboli told Rakhi Sawant that she likes Ali Goni. Now John Kumar Sanu, who was out of the show, gave his reaction. Some time ago, on the show, Jan expressed her love for Nikki. In an interview with Spotboye, Jan said, “Nikki is a gamer mind.” I don’t really know if his feeling for Ali is true. I am not in Bigg Boss house right now, I am watching the footage of the show as much as you guys are watching. ”

Bollywood’s beautiful actress Sunny Leone celebrated Christmas with the family on Friday. Video of this celebration has been shared by Sunny on her Instagram account, which is being well liked. In the video, Sunny Leone is seen dancing with husband Daniel. Both look very happy on Christmas. Sunny also lip-kissed her husband Daniel during the dance. In the video, Sunny Leone is looking gorgeous in a green T-shirt and red pants, while Daniel is seen wearing a red casual T-shirt and handsome in pretense pajamas.

8. Malayalam actor Anil P died due to drowning in water, fans got a big shock

Malayalam actor Anil P passed away on Friday evening. The entertainment industry has suffered a major setback due to this incident. Police said Anil P was taking a bath in a dam in Ernakulam district of Kerala. During this, he died due to drowning. According to the report, he was taken from his dam to the hospital but he could not escape. Kerala Chief Minister Pinarayi Vijayan condoled the death of Anil P. He said, “He was an actor who made a deep impression on the film industry through his memorable work.” His portrayal of characters has deeply touched the hearts of the viewers. Anil’s departure like this is the biggest loss for the Malayalam film industry. I share grief to family and friends. ”

9. KBC 12: Nandini Laxman Madanawale left the show on this question of 12 lakh 50 thousand

Contestant Nandini Madanavale sat on the hot seat in Friday’s episode of the popular show Kaun Banega Crorepati. She dropped out of the show very soon. Actually, Nandini was playing very well, but got entangled on the question of 12 lakh 50 thousand rupees. In such a situation, he decided to quit the show. The question was, which team has the record of scoring more runs jointly with Afghanistan of T20 international?

Bollywood actor Shahid Kapoor has refused to act in producer Karan Johar’s film. It was being told that Shahid Kapoor will soon be seen in the film ‘Yoddhaar’, directed by Shashank Khaitan. It is being produced under the banner Dharma Production of Karan Johar. It is now being discussed that Shahid has refused to be a part of this film. It is being said that before the shooting of the film started, there was a dispute between the makers and Shahid about the script. After this, Shahid distanced himself from the film. After the success of the film Kabir Singh, Shahid is choosing his next project very thoughtfully. Film Warrior will be an action film. Shooting of his film with Shahid was scheduled to begin in January 2021.

Resource-rich country will have to be ready to take advantage: Amitabh Kant

Shahrukh Khan’s daughter Suhana gets this special gift on Christmas, seen in video