Before the Supreme Court’s decision, Sushant’s sister Shweta shared this message by sharing the photo of Mahabharata. 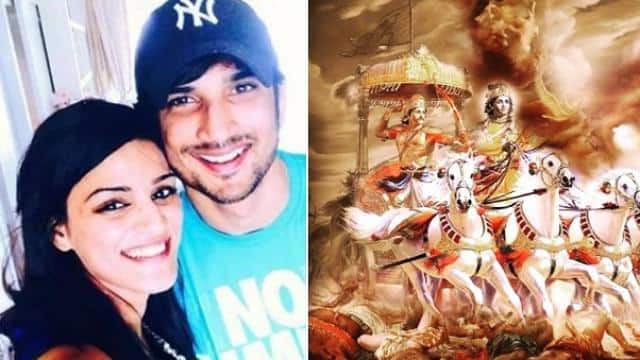 In connection with the death of Sushant Singh Rajput, the Supreme Court will pronounce the verdict today on Wednesday on the petition of actress Riya Chakraborty to transfer the FIR lodged in Patna to Mumbai. Today’s decision of the Supreme Court will decide whether the CBI will investigate the Sushant Singh case or the Mumbai Police will transfer the case from Patna.

Before the Supreme Court’s decision, Sushant’s sister Shweta Singh Kirti has posted one. Shweta has shared a picture of Mahabharata in which Lord Shri Krishna is driving the chariot and Arjun holds his bow. While sharing this photo, Shweta wrote, Take us from darkness to light, refuge.

The Bihar government had told the apex court in this case that due to ‘political influence’, Mumbai Police had not even registered an FIR in the case of actor Sushant Singh Rajput. On the other hand, the Government of Maharashtra argued that the Bihar government had no rights in this matter. Riya Chakraborty’s lawyer said that the Mumbai Police investigation had gone a long way in this case and it had recorded statements of 56 persons.

On the contrary, on behalf of Sushant Singh Rajput’s father KK Singh, senior advocate Vikas Singh said that he did not have confidence in Maharashtra Police. They said that the handover of the case to the CBI should be confirmed and the Maharashtra Police in Mumbai be directed to cooperate with the CBI in this matter in every way.

UP Shadi Anudan Yojana: Girls to get 51,000 rupees after 18 years, avail this way