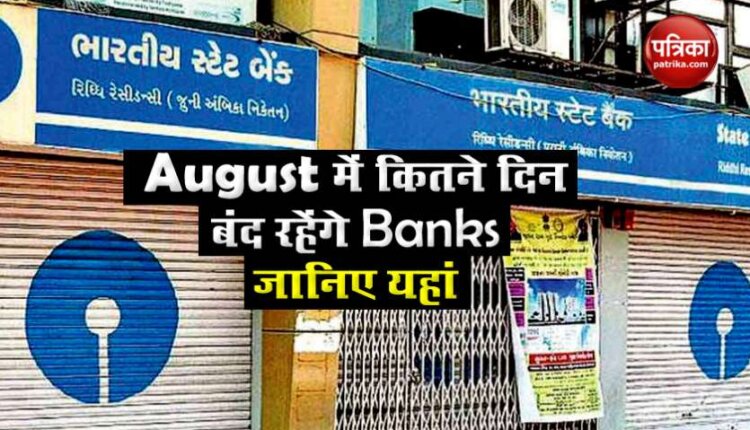 new Delhi. Reserve Bank of India ( reserve bank of india ) According to the month of August, in some cities, banks like Eid-ul-Adha, Raksha Bandhan, Sri Krishna Janmashtami, Independence Day, Ganesh Chaturthi, will remain closed on some days (Bank Holiday in August 2020). At the same time, there are some festivals like Srimanta Sankardeva, Teej, Karma Puja and Thiruvanam / Indra Jatra’s Tithi, which celebrate only special states. On that day, banks will remain closed in those states. In such a situation, you can guess how many days Bank Holiday will be in the month of August. In this era of Corona virus, you have to prepare from now on how banking related tasks will be dealt with. If you did not do this, you would regret a lot in the month of August. Let us also tell you, on which date in the country, which state bank will be on holiday.

5 Sundays and two Saturdays
There are 5 Sundays in the month of August. Which are falling 2, 9, 16, 23 and 30. Banks are on holiday all these days. On August 8 and 16, there will also be the second and fourth Saturdays. There will be a holiday in banks on both these days. That is, banks are going to remain closed all over the country in these seven days. At the same time, many festivals and events are also coming in this month. Because of which banks will have a holiday in the whole country and some states.

Also read: Ban on government’s import of color TV, another blow to government of China

August 13: Banks in Imphal will remain closed due to Patriot Day.

August 15: Banks will be closed all over the country on the occasion of Independence Day.

August 21: Banks will remain closed in Gangtok for Teej.

Sushant Singh Rajput’s trainer disclosed, told- After dating Riya Chakraborty, there was a lot of change in the behavior of the actor, taking mysterious medicines

Plan on buying a home loan and buying a house, so keep an eye on the interest rates…

Diesel became cheaper for the fifth consecutive day, know how much the price of…