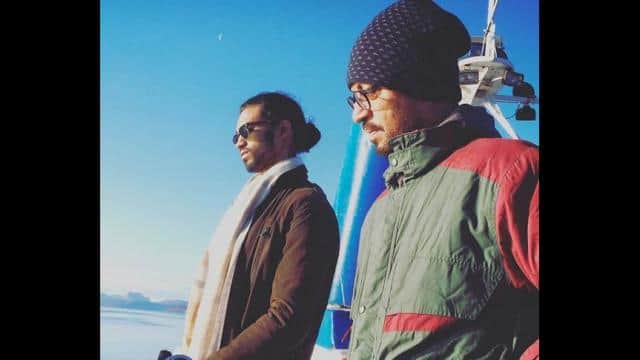 It has been 6 months since the death of Bollywood veteran actor Irrfan Khan. Son Babil often shares posts on social media in his memory. Now he has shared an unseen photo with father Irrfan. While sharing the photo, Babil has written, “2 Man Squad”.

In this photo shared on Instagram, Babil and Irfan are standing on a boat and looking down. This photo is of winter. Irfan is wearing a jacket and a cap on his head, while Babil has a muffler around his neck. After seeing the photo, Irfan’s fans are also remembering him. One fan wrote, “Irrfan is always in our memories and in our prayers”. Another fan has written, “Babil, you always keep putting such photos, so that we can feel around Irfan”. Another wrote, “We will never forget Irrfan”.

Earlier too, Babil shared a throwback video of mother Sutapa Sikdar, which was quite emotional. In the video, Irrfan is seen singing a song for Sutapa. The video shows Irrfan Khan and Sutapa walking on the road. Irrfan is singing the song Mera Saaya Saath Hoga Hoga for Sutapa. He asks Sutapa, ‘My shadow or your shadow’? In response, Sutapa says, thy shadow. Sharing this video, Irrfan’s son Babil wrote in the caption, “Mera saaya ya tera saaya?” I have come to leave my mother’s airport. ”

Another photo was shared by Babil with father Irrfan. He wrote in the caption, ‘When I change places while walking along the banks of the lake, I like how you still touch my soul today. I made that leap after learning that she was a comic. You said that that’s all you have to do. Commenting on this emotional post, Irfan’s wife also wrote, ‘I have kept this sweater of yours to capture this moment.’