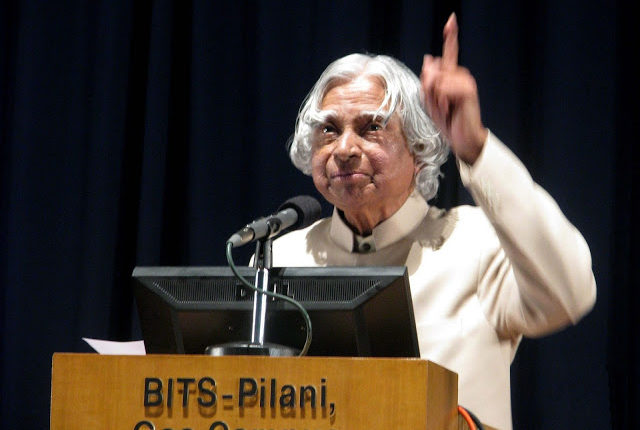 Indeed, Monday was a black day for the country. While the people were trying to recover from the fear of terror attack in Punjab, the country lost a great leader, a scientist and a teacher. Former Indian President APJ Abdul Kalam, 83, died due to a cardiac arrest while delivering a lecture to the students of Indian Institute of Management (IIM) – Shillong, Meghalaya on Monday.

Seeing him collapse on stage, Abdul Kalam was rushed to a private hospital. However, the doctors couldn’t save him. The news of his death spread like fire. The social-networking sites were flooded with condolence messages. Apart from #GurdaspurAttack, #MissileMan and #APJAbdulKalam were also trending. The entire nation mourned the loss of a
nobleman.
Kalam’s body was flown from Shillong to Delhi Tuesday morning and was received by Prime Minister Narendra Modi and
President Pranab Mukherjee at the Delhi airport. He was given a guard of honour by three services. From the airport, his body was brought to his home in Delhi at the 10 Rajaji Marg, where he had been residing for the past seven years.

Narendra Modi along with Pranab Mukherjee and Vice-President Hamid Ansari paid tribute to Abdul Kalam at his
residence. Many other political leaders also visited Abdul Kalam’s residence to pay homage. Union Home Secretary LC Goyal said that seven-day mourning has been declared by the Centre. Both the Houses of Parliament have been adjourned till
July 30 as a respect to the “People’s President”. The funeral shall take place in Rameswaram on Thursday.

Born in Rameswaram, Tamil Nadu, Abdul Kalam studied physics and aerospace engineering from Madras Institute of
Technology. His involvement and contribution in Military Missile development and India’s Civilian Space Program made him known as the Missile Man. He played an important role in India’s Pokhran-II nuclear tests in 1998. He was also awarded Bharat Ratna and Padma Bhushan. Kalam served as the 11th Indian President from July 25, 2002, to July 25, 2007.