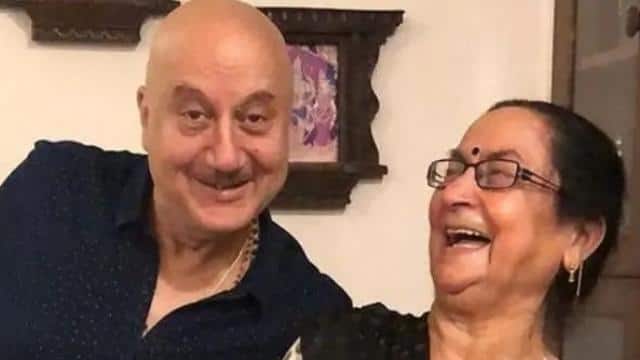 The corona virus has reached the home from the common man to the celebs. Recently, actor Anupam Kher’s mother, brother Raju Kher, sister-in-law and niece were found to be Corona positive, which he gave to the fans through video. Anupam’s mother Dulari was admitted to the Kokilaben Hospital, while the brother and his family quarantined themselves at home. Anupam Kher has given a health update of mother by sharing the video on Twitter.

In the video, Anupam Kher is saying that Kokilaben’s doctors have declared her mother healthy. However, after being discharged from the hospital, he will have to commit himself to home quarantine for a few days. He further said that I would like to thank the doctors, staff, nurses of Kokilaben that they took great care of my mother during this difficult time. He thanked the fans and said that all of you gave me great encouragement and support. All of you gave me prayers. Prayed for me. Holded my hand. It is difficult for me to say in words how I can thank you.

Simi Grewal praised Kangana Ranaut, said- ‘There was an attempt to end my career too’

Mom has been declared healthy by all medical parametres by the doctors at Kokilaben Hospital. She will now be quarantining at home. Love heals. Stay safe but clear be distant emotionally from Covid + patient / families! Doctors & @mybmc Officers / employees are real HEROES. #JaiHo4 pic.twitter.com/EiZBTrA1PW

Amitabh Bachchan, who is undergoing treatment in the hospital, shared the poem of father Harivansh Rai, Fans said – Sir, come back soon

Anupam Kher further stated in the video that my condolences to all the families whose homes have one or more people coronated and they feel very lonely. People around them get away from their family, however, the reason behind their move is right because there is no appearance of this disease. I think about them all, we will all pray for you and send our prayers that you all get well. Thank you once again for your love and goodwill.

Handicap Pension: Now the government will give 500 rupees every month for the disabled, apply for benefits like this