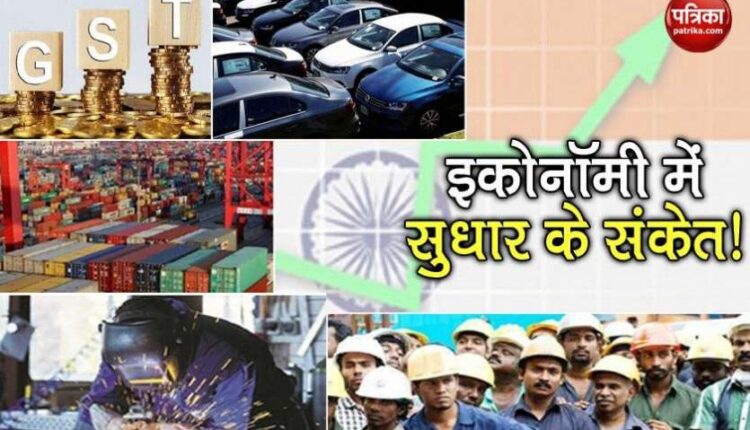 new Delhi. Ever since the month of October has started and the figures of manufacturing from September to GST collections, exports to auto sector sales and fall unemployment on 2 October have come, the eyes of the government have increased. The Union Minister is taking the signal of recovery in this economy. The question is whether the figures in September came as a sign of recovery in the economy or something else. That too when the country’s GDP fell by 23 percent in the first quarter. Well, experts are considering it as a good sign. They say that the September quarter GDP figures will be very good. Some experts are also pointing towards the worsening of the economy in the coming days. By the way, the figures of new corona cases have started falling in the country. Let us talk about the sectors that have data in the last three days and are pointing to the signs of improvement in the economy. At the same time, there has been a spurt in the sales of cars in the month of September. If you look at the figures, Maruti Suzuki’s sales have seen a growth of more than 30% in September compared to the previous year. This figure is about 4% growth in Hyundai’s cell. Bajaj Auto grew by 10 percent. Sales of TVS Motors increased by 14% this September compared to the previous year. On the other hand, Hero MotoCorp has seen this increase of around 17 percent. The coming two months are of festive season. In which companies will also give bumper discounts, in this case, this figure is expected to increase further. The country’s manufacturing sector was the biggest gainer in September for nearly 8.5 years and its IHS Market Purchasing Managers’ Index, or PMI, rose to 56.8. According to the report released on Thursday, due to increase in economic activity during the unlock, factories were able to produce at full capacity. Manufacturing activity saw the biggest jump since January 2012 on a month-on-month basis, with new orders picking up domestically and also from overseas. The manufacturing PMI was recorded at 52 in August, rising to 56.8 in September.

4. There was also a jump in export figures The country’s exports rose 5.27 percent year-on-year to $ 27.4 billion in September, after a six-month decline. The country has shipped goods worth $ 27.40 billion during the period compared to $ 26.02 billion exported during the same period last year. According to the Ministry of Commerce and Industry, there has been a positive growth during September 2020 compared to September 2019. The top five sectors that recorded the highest growth include cereals, iron ore, rice, oilseeds and carpets. Commerce and Industry Minister Piyush Goyal said in a tweet on Thursday that Make in India, Make for the World: India’s exports grew by 5.27 per cent in September 2020 over the same month last year. He also mentioned in one of his tweets that the country’s economy is growing rapidly and has crossed the pre covid level.