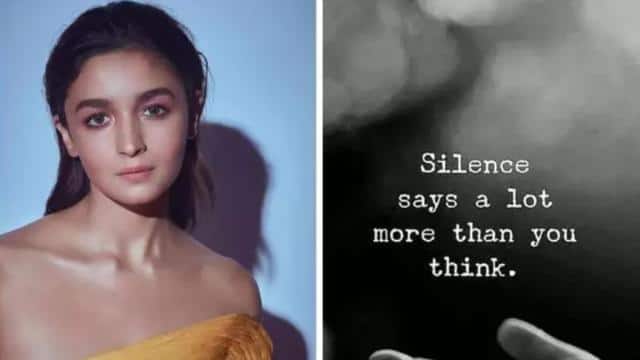 After the death of actor Sushant Singh Rajput, Alia Bhatt, Mahesh Bhatta and many Bollywood celebs trolled on social media. Even their followers have reduced in the meantime. Alia Bhatt’s film Road 2 recently released. Fans disliked it more than like. Despite being a troll, Alia Bhatt and her entire family kept silence. Now Alia Bhatt has shared a post, which is quite positive.

Alia Bhatt recently got a photoshoot for AL magazine. While sharing a photo of this, Alia writes that when you put your face in front of the sun’s rays, the whole light falls on you and darkness is behind. With this, Alia writes that you cannot control all the events that happen to you, yes, but you can definitely decide that it does not matter to you. Silence tells a lot. So much that you can’t even think.

Bollywood actress Kangana Ranaut is voicing her opinion on the Sushant Singh Rajput case. He shared a photo while targeting Alia Bhatt. It has a picture of Kangana on one side and Ranbir Kapoor, Karan Johar, Alia Bhatt and Varun Dhawan on the other side. While ‘Sanitizer’ was written on Kangana’s picture, ‘Virus’ is written on the photos of other celebs. While sharing this photo, Kangana wrote in the caption, ‘Mice go back to the bill or else Gabbar will come. If you want to give a film style, then give it like this. Don’t be afraid of the hashtag Boycott Kangana trend, try something else. ‘