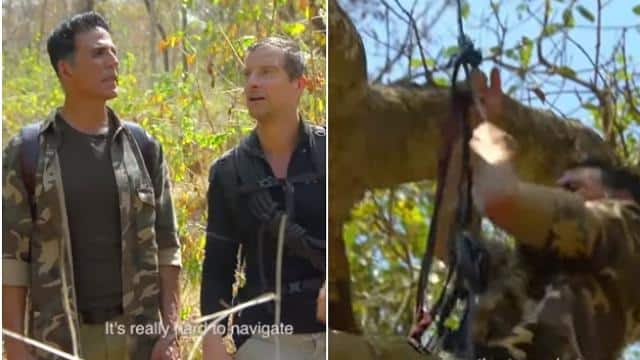 After PM Narendra Modi and Rajinikanth, Akshay Kumar is now going to be seen in Bayer Grylls’ show Into the Wild with Bare Grylls. Akshay has shared a promo video of the show. Sharing this video, Akshay wrote, ‘When a foreign adventurer meets a desi action junkie, don’t expect any fireworks because we are the same. 2 fitness enthusiasts arrived in the forest, which I would call a walk in a park. This is a glimpse of him. ‘

In the video, Akshay is seen doing a lot of adventure with Bayer. Sometimes he is seen facing leopards and elephants, sometimes actors are seen climbing trees.

When a Western Adrenaline Adventurer meets an Eastern Action Junkie, dont expect fireworks coz Brotherhood is what we found.2 fitness enthusiasts enjoying a stroll through wilderness is what I call a perfect walk in the park. Considerably a preview #IntoTheWildWithBearGrylls @BearGrylls pic.twitter.com/eWXibJBqOc

At the same time, he also drinks tea of ​​elephant poop. Akshay tells Bayer that his father is his biggest inspiration and he follows his rules. Akshay said, ‘My father has influenced my life the most and I follow his rules. I hope my son also walks this path. ‘

Earlier, PM Modi and superstar Rajinikanth were seen on the show. PM Modi spoke with Bayer on animal protection and environmental change. PM Modi shot in the jungles of Jim Corbett in Uttarakhand with Bayer Grills. The episode with PM Modi was quite popular.

Vodafone-Idea has become ‘Vi’, after the merger is completed, the company has re-branded