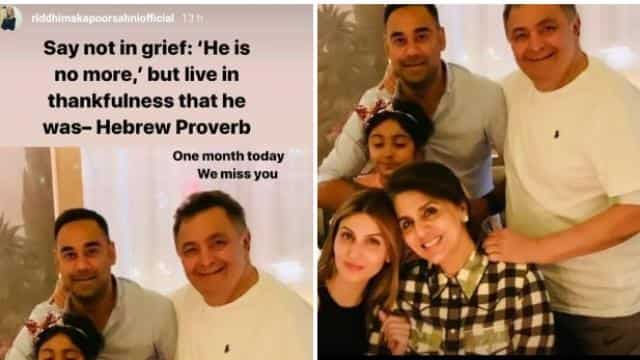 It has been a month since the demise of Bollywood actor Rishi Kapoor, but his family remembers him all the time. Rishi Kapoor died on 30 April. A month after his death, the Kapoor family has become emotional once again. Vine Neetu Singh has written an emotional post in memory of Rishi Kapoor, while his daughter Riddhima has posted a photo on social media in which she is seen with her father Rishi Kapoor and her entire family. At the same time, actor Armaan Jain has remembered Rishi Kapoor through a throwback photo.

Please tell that Rishi Kapoor was fighting leukemia for one and a half years. He also underwent treatment in New York for a long time. On April 29, Rishi Kapoor was admitted to HN Reliance Hospital after his condition deteriorated, where he breathed his last on April 30.

Writing a Hebrew proverb, Riddhima said, “Do not say in sorrow that he is no more, but to thank that he was.” In this photo, Riddhima along with her daughter Samara Sahni and husband Bharat Sahni are also present.

Hrithik Roshan’s sister made her Bollywood debut, was happy and praised the actor

Actor Armaan shared the photo and wrote, ‘No one can ever forget this lunch at Deonar Cottage. I can not say in words how much I want you, how much I miss. You all have a different place in my heart. Nani Ji, Ritu Masi and Chintu Mama. Memories for a lifetime.

The entire Kapoor family is seen in the photo Armaan has shared.