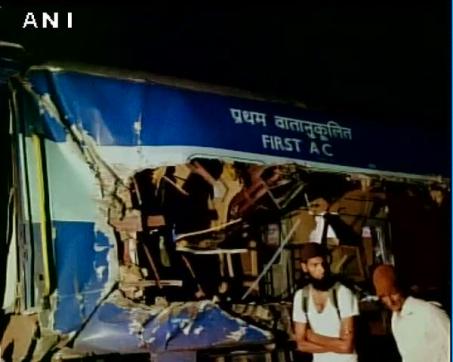 Andhra Pradesh’s Anantapur district when a lorry collided with the train that killed five people, including an MLA in the accident. According to officials, last night the Bangalore-Nanded Express accident occurred at half past two near the Rangapalli crossing in Anantapur district.

Bangalore Divisional Railway Manager Sanjeev Agarwal said “the lorry was laden with granite stone. He also said as soon as the truck crashed into the first class compartments of the train the rock got hit onto the passenger in the train.”

Relief efforts continue
The dead included a Karnataka MLA A. Venkatesh Naik. Naik has been Former MP as well. Three people were injured in the accident. Railway officials said the train had pulled out of the affected coaches and the relief and rescue work is continuing on a war footing. The incident affected traffic on the Bangalore-Guntakal route. Currently, work is continuing to remove the track.

Agarwal says that this incident happened near the railway crossing, it was manned, there were a red light and hooter was also playing. Agarwal also said, “The lorry driver fled the accident spot, and his death has not occurred.”

The minister Suresh Prabhu have regretted the incident and tweeted after the incident “My sympathy is with the families of the dead. Immediate medical relief has been rushed to the spot. The authorities have also been asked to go on the spot”. He is regularly reviewing the situation.