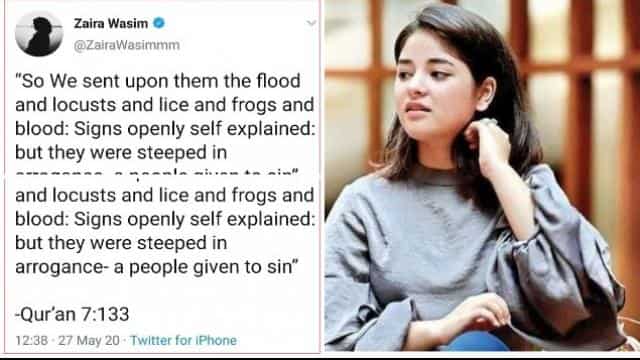 Actress Zaira Wasim, who debuted in Bollywood with Aamir Khan from the film Dangal, has now said goodbye to the acting world. However, she remains in the news due to some reason. Meanwhile, Zaira made a tweet about locusts coming to India via Pakistan, which provoked people and are calling them bad on social media. Zaira in a tweet compared the attack of locusts to the havoc of Allah, which people are criticizing. After seeing his criticism, Zaira Wasim deleted some of his tweets.

Actually, Zaira Wasim, while sharing the verse of the Quran, tried to justify the attack of the locust party by him, due to which he got angry and started trolling them. Zaira wrote that all the disasters which have been witnessed in the recent past including the havoc of locusts are the result of evil deeds of human beings.

Locusts are in the wrong country which is why @ZairaWasimmm is getting all poetic & misty eyed.

Had the locusts been in China, the Chinese would be thanking God for sending them dinner. And after eating, they would have quoted Confucius.

Regards all about geography 🥂 https://t.co/7RTllhunmG

Zaira has created a ruckus on social media on this trend. Users are engaged in trolling Zaira Wasim. One user wrote that if it was in China, people would thank the above. Some users wrote, ‘When these locusts are troubling millions of farmers and their crops are getting spoiled, then what is the meaning of this tweet in their time?’

If one wonders how does a millenial who was offered an opportunity in uber cosmopolitanism, end up with so much bigotry and hate, she is mentioning the source also. pic.twitter.com/k3FOZrRvub

Some users have even said that it is forbidden to use Twitter in Islam, then they should leave Twitter. One user also said that, she can be fanatical but do not show so much hatred for farmers disturbed by grasshopper attacks.

From apes we became humans but some ppl wanna devolve into apes and act like animals. Preaching a 1400yo book whose sole intention was conquest and conquest. Feel pity for Evolutionary theorists! 48#ZairaWasim #coronavirus #Dangal pic.twitter.com/zcYmto5UUG

1) #ZairaWasim Dear Zaira Hope you are Good, Why you are becoming so complicated! I’m your Wel wishers! you have leave your acting that’s your choice! You are a good human being! You can joy your life as a simple person! Then you may get all of joy! Look back your good time

Let me tell you that during the Corona period, a group of locusts from Pakistan has become a big problem for the farmers of India. It has been attacked in 6 states of the country. The locust attack has spoiled several hectares of crops so far. However, the government has issued instructions to prevent its outbreak.