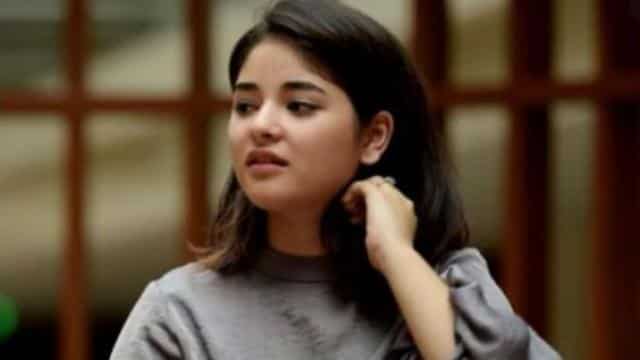 Recently, Zaira Wasim deleted her Twitter and Instagram account. In fact, he had made a contrarian tweet about locusts coming to India via Pakistan, after which people called him good on social media. They were very angry. Zaira in a tweet compared the attack of locusts to the havoc of Allah, which people started criticizing. Later, Zaira deleted her account with a tweet while looking at the trollers.

Zaira made her comeback on social media a day later. He said that I had temporarily closed my social media. Zaira has also responded to a user and explained why he left social media for a day. She writes that because I am a human being, like the rest, who has the right to take a break from everything. Then, when the noise in and around the brain increases greatly.

Because you’re just a human, like everyone else, who’s allowed to take a break from everything whenever the noise inside my head or around me reaches it’s peak 🙂 pic.twitter.com/BMar06jIXl

Let me tell you that people trolled him on the contra tweet made by Zaira Wasim. One user wrote that when millions of farmers are upset due to these locusts and their crop is getting spoiled, then what is the meaning of this tweet in their time? Some users even said that it is forbidden to use Twitter in Islam, then they should leave Twitter. One user also said that, she can be fanatical but do not show so much hatred for the farmers disturbed by the locust attack.

Let me tell you that during the Corona period, a group of locusts from Pakistan has become a big problem for the farmers of India. It has been attacked in 6 states of the country. The locust attack has spoiled several hectares of crops so far. However, the government has issued instructions to prevent its outbreak.

Bollywood industry stalled, will pick up speed, shooting will start soon, know what Bollywood celebs said on this