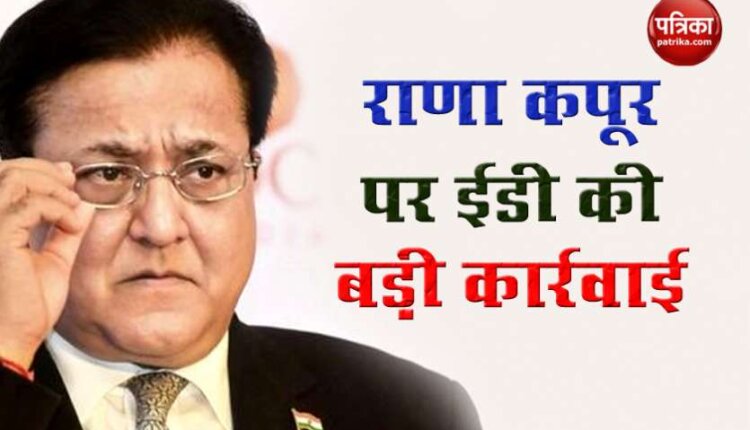 new Delhi. The Enforcement Directorate is continuously taking action in the Yes Bank case. Now ED will take possession of property located abroad for the first time in Yes Bank Scam case. According to the information, preparations are being made to attach a fixed deposit of about 50 crore central London property as well as fixed deposit related to Rana Kapoor next week. The attachment of Rana Kapoor Property Attachment in London will be the first step taken by the ED abroad in the Yes Bank case.

Rana Kapoor’s three properties in central London
According to media reports, ED has identified Doit Creation Jersey Limited, the company of Rana Kapoor’s daughter Rakhi Kapoor, with an investment of Rs 83 crore. Rana Kapoor owns three properties in London. There is a guest house with an office at 77 South Audley Street, whose cost is estimated to be around 107 crores. There is also a residential property. According to the information, a property in Central London will be seized next week under the Prevention of Money Laundering Act. The entire paper has been worked out for action.

These properties were also identified
On the other hand, the ED has identified other properties of Rana Kapoor and his family. Which includes bungalows, villas, clubs, resorts, apartments, farmland etc. in Delhi, Mumbai, Goa, London, US, UK and UK. Whose value is being estimated at several thousand crores. According to the information, all the assets have been received as commission in lieu of wrongful loans. The special thing is that three of these bungalows are located in Lutyens zone of Delhi, in which 40 Amrita Shergill Marg is worth Rs 375 crores. The cost of the bungalow at 18 Kautilya Marg is Rs 195 crore and the cost of the bungalow at 20 Sardar Patel Marg is being said to be Rs 175 crore. The 7.5-acre prime beach front land has been identified in Alibaug near Mumbai.

Attached to this property
According to the information, the Infrastructure Directorate has already attached assets worth Rs 59 crore in India. According to experts, this property will be attached for the first time abroad in the Yes Bank scam. A charge sheet was filed in May and June against Yes Bank and Family Members on behalf of both ED and CBI. It was claimed by the ED that Rana Kapoor used the bank as a personal property for illegal activities for years. Rana Kapoor is currently lodged in Taloja Jail in Mumbai.